This website uses cookies to ensure we can provide you with the best browsing experience.
x
NDC - News- The NDC participates in a conference on Women, Peace and Security at the Festival of Diplomacy

The NDC participates in a conference on Women, Peace and Security at the Festival of Diplomacy

On 26 October 2015, as part of the Festival of Diplomacy currently being held in Rome, the NATO Defense College co-organized a conference entitled âWomen, Peace and Security: 15 years after Security Council Resolution 1325â. The seminar was held at the UniversitÃ  LUISS Guido Carli. NATO and the NDC were represented on a distinguished panel of speakers by Ambassador MarriÃ«t Schuurman, the NATO Secretary Generalâs Special Representative for Women, Peace and Security, and Dr Daria Daniels Skodnik, Dean of the NDC. Together with Ambassador Laura Mirachian and Mrs Irene Fellin, a consultant at the Rome-based Institute of International Affairs and an expert on gender issues, they discussed the progress achieved thanks to UN Security Council Resolution 1325 fifteen years after its implementation. 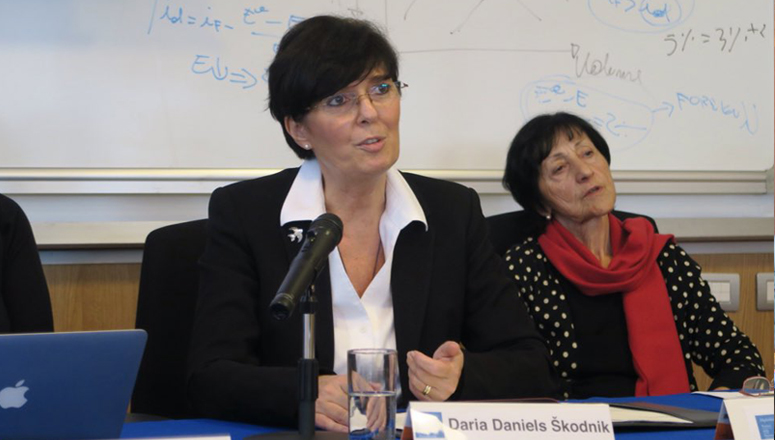 Resolution 1325, which was adopted in October 2000, relates to women, peace and security. It stresses the importance of women in the prevention and resolution of conflicts, in peace talks and negotiations, in peacebuilding and peacekeeping, and in humanitarian action in times of crisis. It provides a strong rationale for all actors to increase the participation of women in their peace- and security-related efforts, and to protect women and girls from gender-based violence brought about by their exposure to violent conflict. In essence, Resolution 1325 calls for equal participation and full involvement of women in the promotion and maintenance of peace and security.

As mentioned above, the NDC was represented by its Dean, Dr Daria Daniels Skodnik. The Dean spoke about the important role of the NDC as the premier educational and academic institution of the Alliance. She noted that, while for many centuries war and conflict have been mostly menâs business, in todayâs world it is increasingly important to understand peacebuilding and conflict resolution as a shared effort that should be of concern to both men and women alike. The NDC strives to educate the future leaders of the Alliance in a way that enables them to better understand the complexity of todayâs international system, and makes them committed to building a fair, just and peaceful society for men, women and children alike.

The event was organized as part of the ongoing Festival of Diplomacy (Festival Della Diplomazia), now in its sixth edition, which is taking place in Rome from 22-30 October 2015. The aim is to raise awareness of the central role that Rome plays in international affairs. The Eternal City is home to many international organizations, academic institutions and a large diplomatic community, consisting of 139 Embassies to the Italian Republic, 78 to the Vatican, 134 to the FAO and 73 to the Republic of San Marino, all of which interact with the city on a daily basis. The theme of this yearâs edition of the Diplomatic Festival is âInclusive growth, inequalities and political imbalancesâ. Throughout the Festival a series of seminars, lectures, conferences and meetings take place in various locations and with different audiences, in order to create a unique platform for discussion of contemporary policy issues relating to international affairs.

The NDC is involved in the organization of the Festival for the second time this year. Apart from the debate on Women, Peace and Security, the NDC will be represented during two other events within the Festival. On 27 October 2015, NDC Research Fellow Dr Mehmet Can Kasapogl will take part in the debate entitled âMigrants at Seaâ. On 28 October 2015, NDC Middle East Faculty Director Colonel Giuseppe Morabito will address the national House of Representatives on current issues and scenarios related to geopolitical security.