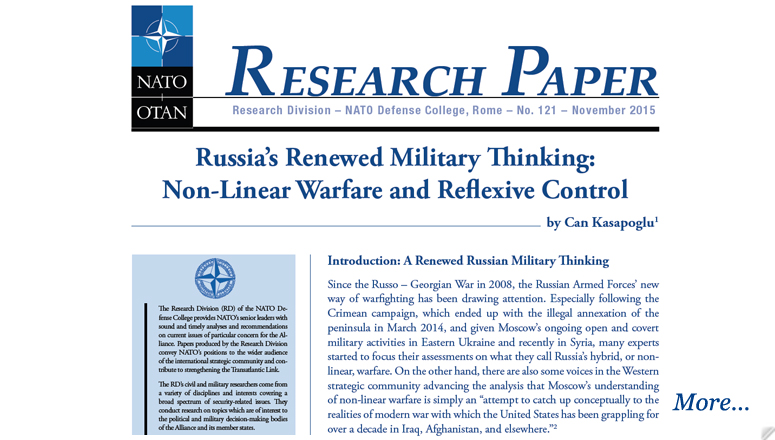 Dear Reader,
The NATO Defense College Research Division is pleased to bring you its latest Research Paper by one of our first two NDC Eisenhower Fellows: Dr. Can Kasapoglu, who has spent the Autumn with us in Rome. His paper argues that while the key word for depicting the Western understanding of hybrid warfare remains âmultimodality,â the key word for the Russiansâ offensive nonlinear warfare paradigm should be âpenetration,â as in the old military concept of deep penetrating operations.

NATO is not facing a new Russian military strategy, according to Can, but rather a new way of military thinking that brings about shifts at strategic, operational, and tactical levels along with the doctrinal order of battle and military strategic culture. What NATO is facing could well be depicted as a "maskirovka-driven hybrid blitzkrieg." This is not to imply that the Russian military is particularly good, or that it is stronger than the West; it has serious internal problems. But it is led by an authoritarian regime that can make decisions more quickly and with less second-guessing than can a multinational organization like NATO. Rather than focusing on the question of "how to confront the Russian hybrid warfare challenge," therefore, he suggests that the better question for NATO is, first, "how to best understand the Russian hybrid warfare challenge."

We hope you find this paper illuminating.
Regards,
Jeff