Upon arrival in Kuwait on Saturday evening, Senior Course 127 attended a working reception kindly hosted by Cheikh Thamer, President of the National Security Bureau, who in his address thanked the College for its second visit to Kuwait after the first in 2011 made by Senior Course 118. 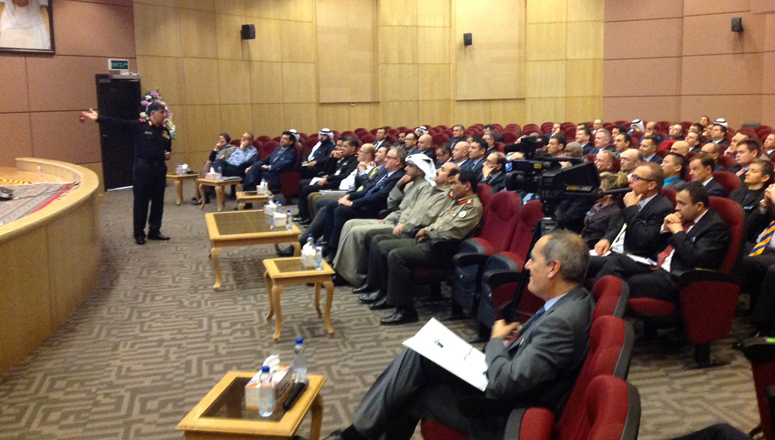 After having savoured a traditional meal of camel meat offered to guests of honour, Course Members attended a number of briefings and cultural events on Sunday, which is a normal working day in Kuwait.

Briefings were given at the Joint Command and Staff College, where Major General Abdallah A. Dashti outlined the strategic regional context of Kuwait, which was followed by a lively and candid Q and A.

The delegation then moved to the Saud N. Al-Sabah Kuwait Diplomatic Institute to be addressed by the Director General Ambassador Dr Hassan bin Ibrahim Al Mohannadi and two other briefers â Mr Abbas Al-Mejren and retired Major General Saber Al-Suwaidan â who explained the political impact of the decline in oil prices, as well as Kuwaiti external policy, including its role in the Gulf Cooperation Council.

After a short break for lunch, the Senior Course programme focused on cultural awareness by visiting two museums: the Museum of Modern Art, where paintings and sculptures from local artists are displayed; and the Memorial Museum, to remember the invasion of the country by Iraqi armed forces in 1991.

During that time, the spouses1 were enjoying their own programme of activities, including a visit to the Kuwait Women Cultural and Social Society (KWCSS), whose main objective is to promote womenâs participation in all aspects of society through cultural and social initiatives, mainly focusing on children. The visit of the Senior Course spousesâ delegation was highly appreciated by the KWCSS and even reported in a national newspaper.

In the evening, all Field Study participants were able to experience another aspect of the local culture, through a visit to the main souk of Kuwait city, where smells of incense, perfume and spices blend together.

1 Spousesâ participation in the Field Study is a non-hosted initiative paid for by Course Members.