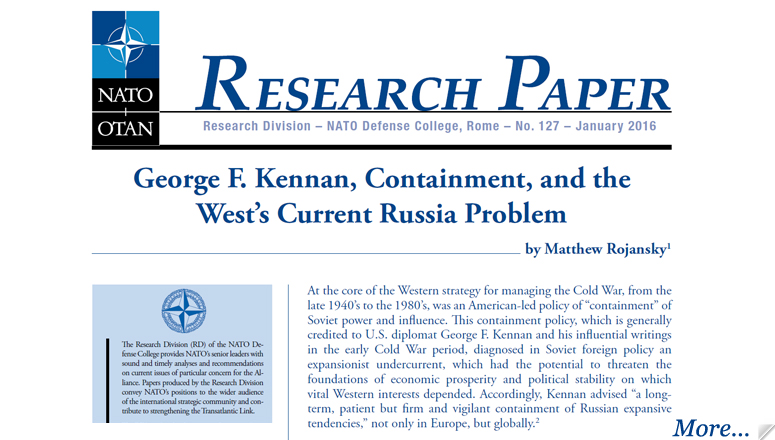 Dear Reader,
Containment was a mode of East-Western relations that many presumed would be relegated to the dustbin of history at the end of the Cold War. However, the current period might accurately be dubbed the era of ânew containmentâ, with many urging the United States, NATO and Europe to once again contain, constrain and counter what they view as Russiaâs expansionist policies.

The latest Research Paper by the NDC Research Division argues that although the circumstances around the conflict between Russia and the West today differ considerably from those of the Cold War, it nonetheless poses a serious threat to European security and stability, and demands a careful and comprehensive Western response. The paper was written by Visiting Scholar Matthew Rojansky, Director of the George F. Kennan Institute in Washington, DC. Matt served as our in-house expert on Russia for five weeks in late 2015.

The containment policy is generally credited to US diplomat George F. Kennan and his writings in the early Cold War period, particularly his famous "long telegram" to the State Department which became a classic article in Foreign Affairs by "X." The author here presents Kennanâs rationale for a containment policy in response to the threat from Moscow, with reference to the potential application of his arguments in the present conflict. It also describes Kennanâs own understanding of containment as primarily a non-military strategy. The paper also recalls Kennanâs specific recommendation that defeating the Soviet threat would require a robust Western capacity to understand Russia, a capacity that he would judge to be sadly lacking today.

We were glad to have Matt on our team and hope you find his paper valuable in explaining possible Western responses to Russian revanchism.
Regards,
Jeff