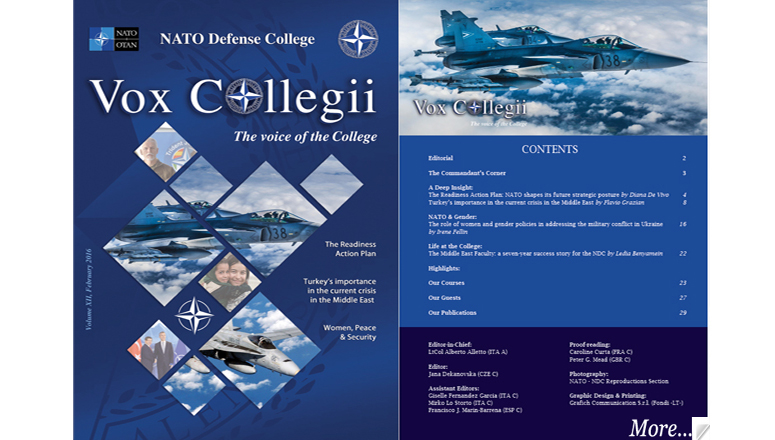 We are happy to announce the publication of the twelfth issue of the College magazine. We trust you will find it interesting. We thank you again for your support, and your positive feedback.

In 2016, large numbers of conflicts around the world still pose a range of different challenges to the Alliance. However, what changes is not so much the occurrence of these conflicts as their nature. New regional players are growing in power and becoming more assertive. Increasing numbers of non-state actors are emerging to jeopardize the established order. At the same time, there are many fragile states with internal tensions that can potentially threaten stability and peace around the world. All of this means that the number of actors with the capacity to use force on a large scale and engage in violence is greater than ever.

If NATO is to remain relevant and continue fulfilling its core function of safeguarding the freedom and security of its members, it has to adapt to this new environment. As the Allianceâs prime educational institution, the NATO Defense College plays a key role in this respect, continuously readjusting its curricula according to current global trends and developments.

Vox Collegii strives to reflect the Collegeâs commitment in the articles selected for publication. The present issue is largely focused on the new challenges and realities that the Alliance is facing. Diana De Vivo writes about the Readiness Action Plan (RAP), examining adaptation measures and how they will affect NATOâs new strategic posture. As recognized at the Wales Summit in 2014, NATO today has to face simultaneous challenges on both its Eastern and Southern flanks. This issue of Vox Collegii presents a rigorous, in-depth analysis of the latter, looking at how they affect urkey in particular. In doing so, we are fortunate to have a contribution from Flavio Grazian on Turkeyâs geopolitics, international strategy and stance within NATO. Finally, NATO has long been committed to the implementation of United Nations Security Council Resolution 1325 on Women, Peace and Security. In this issue of our journal, Irene Fellin presents NATOâs role in the implementation process with specific reference to the conflict in Ukraine.

I trust you will find this issue of Vox Collegii insightful and enjoyable.