On 21st June 2016, Senior Course 128âs visit to Ukraine, as part of the third Field Study, began with welcome remarks by General Genadii Vorobiov, Acting Commandant of the National Defence University, who emphasized the importance of educating and training Ukrainian armed forces for interoperability with NATO countries. 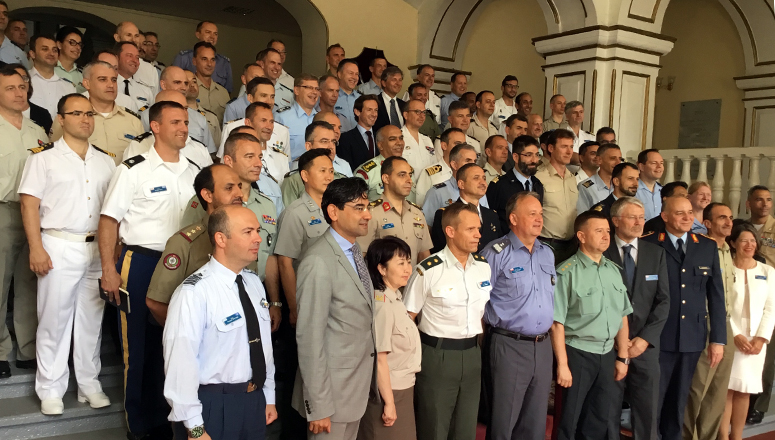 Following the warm welcome extended to Course Members, Mr Ihor Dolgov, Deputy Minister of Defence for European Integration took the floor. Recalling the very recent statements made by the NATO Secretary General Jens Stoltenberg on the security situation in Eastern Europe, Mr Dolgov analyzed the political and military developments in eastern Ukraine from a historical perspective, including the Cold War era, developments in 2008 in the Caucasus and their impact on European security, as well as internal political developments (the demonstrations in Maidan Square). The Deputy Minister stressed that today international law is being violated, that some parts of Ukrainian territory are under attack and under occupation, and that this is an ongoing issue regardless of the international community's reactions. Mr Dolgov gave some concrete examples of the difficulties encountered by international organizations in overcoming the situation in his country, citing the UN Security Council and the OSCE. The Deputy Minister underlined that in view of the ongoing occupation and other divisive propaganda activities the Ukrainian defence structure needs to be revised and adapted to meet the threats and aggression directed against his country, a process which is already underway. In his closing remarks, the Deputy Minister made it very clear that Crimea is part of Ukrainian territory and should be returned to Ukraine.

Following Mr Dolgov, Mr Oleksii Melnyk, Co-Director of the Razumkov Centre Programme on Foreign Relations and International Security Programmes, talked about hybrid war. He gave a very comprehensive presentation on the political and economic climate before the occupation of Crimea and offered his perspective on the future security situation in the region surrounding Ukraine.

In his briefing, Mr Hyrhorii Perepelitsa, Director of the Foreign Policy Institute of the Ukrainian Diplomatic Academy, gave a broad and academic analysis of the global order, the crises affecting geo-strategy, the role of hybrid warfare, as well as the damage to the existing international system and attempts to restructure it. He also gave his views on the features of a multipolar world and some of the current regional conflicts. He also offered his critical approach to ideas for changing the norms and rules of international law, citing some 20th century examples and linking these developments with global financial crises. He concluded that illegal occupations cannot change the international order, because the environment today has changed from what it was in the mid-20th century.

The programme continued with an interesting presentation by Mr Konstantyn Kononenko, Deputy Director of the National Institute for Strategic Studies. He analyzed counter-measures against hybrid threats, drawing parallels with political developments in the country. He further focused on the hybrid warfare that Ukraine was subjected to in 2014, in the eastern regions of the country in particular. Deputy Director Kononenko delivered a frank assessment of the current situation in Ukraine, with some statistics on the country's economic and military power. The ideological basis for the aggression and the propaganda network against Ukraine were also discussed.

The group received a final briefing from Mr Oleksandr Litvinenko, Deputy Secretary of the National Security and Defence Council, who gave a comprehensive review of the defence and security sector in Ukraine. He reiterated the importance of SC128âs visit to Ukraine and the region to understand the real dynamics in the region. He explained how Ukraine reviewed its defence and security doctrine in 2005, and again in 2014 after the first signs of aggression and occupation. In the current national defence and security strategy, threats are clearly stated and Ukraine should be the first to carry responsibility for defending its territories, in accordance with agreed documents, according to Litvinenko. The speaker gave a detailed explanation of Ukraine's international cooperation in the field of defence and security, and the role of national agencies in this regard. He put special emphasis on the development of cyber defence capabilities. The session ended with a knowledge-enhancing and insightful Question & Answer period, an objective and tradition of the NDC after each presentation.