This website uses cookies to ensure we can provide you with the best browsing experience.
x
NDC - News- New Research Division Publication - âSubstantial Combat Forcesâ in the Context of NATO-Russia Relations 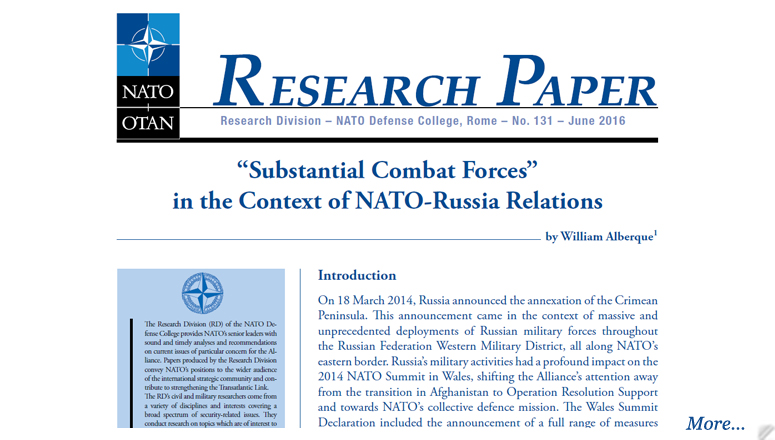 The latest paper by the Research Division reveals the historical context of the NATO pledge on "significant combat forces" (SCF) made in 1997 as part of the signing of the NATO-Russia Founding Act. It focuses on the political circumstances under which the pledge it was formulated and introduced. The SCF pledge had played a significant bridging role during the negotiations of the Adapted Conventional Armed Forces in Europe Treaty (ACFE) and the fourth wave of NATO enlargement in 1999.

The paper seeks to answer the following question: what did the SCF pledge mean to NATO and to Russia at the time it was given? It clarifies, through a close examination of the historical record, the meaning of the SCF pledge as it was understood by those who made it.

This is a significant point of disagreement between Russia and the West as NATO increases its assurance and deterrence measures in the exposed member states in Northeastern Europe.

We hope you find the discussion in this definitive piece on the subject valuable.