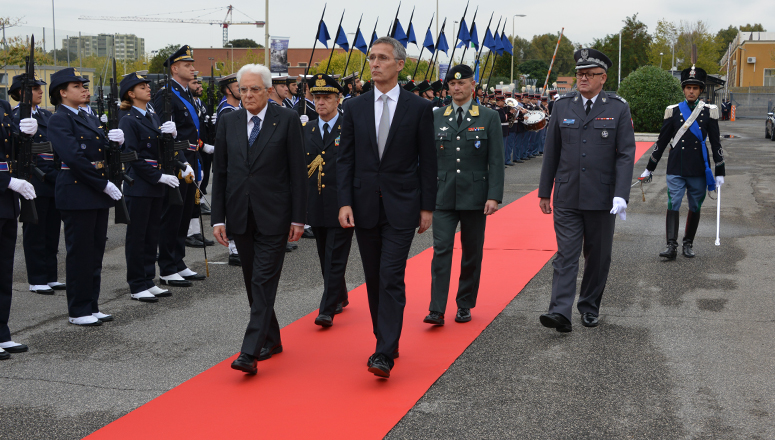 The day started with the arrival of NATO Secretary General H.E. Jens Stoltenberg, followed by the North Atlantic Council (NAC) and the Military committee (MC). The NATO delegation was greeted by the NDC Commandant, Major General Janusz Bojarski (POL F).

The President of the Italian Republic H.E. Sergio Mattarella was welcomed by the NATO Secretary General and the NDC Commandant, before receiving a ceremonial salute from the guard of honour. Other high-ranking dignitaries were in attendance, including the Italian Minister of Defence, the Hon. Roberta Pinotti; the Chairman of the Military Committee (CMC), General Petr Pavel (CZE A); and the Italian Chief of Defence, General Claudio Graziano. Many ambassadors to Italy were also present for the ceremony, along with Italian political and military authorities.

The second part of the ceremony took place in the Maynard-Thorn Hall, where Major General Bojarski gave a brief welcome speech before offering the floor to Secretary General Stoltenberg for the opening address.

President Mattarella then spoke, examining the complexities of the current international situation. He also spoke of the âindispensable [need] to curtail the irrational ongoing tensions, to whose dangers our soldiers are exposed on a daily basisâ, expressing his conviction that âany show of force, and the continuous measuring of strength, are just the first step in an escalation that can be defused only over a period of years and by re-establishing the mutual trust it has jeopardizedâ.

As a sign of appreciation for their visit, a copy of the Anniversary Chronicle Book was presented to the Italian President and the NATO Secretary General. The book takes the reader on a journey through the Collegeâs life from 1951 to 2016, with a detailed account of the move to Rome in 1966.

The NATO Defense College was founded in 1951, in response to the clear need to educate the leadership of the Alliance for their role in promoting systematic international cooperation as post-war reconstruction gathered pace. This need was clearly expressed on 25th April 1951, in General Dwight D. Eisenhowerâs famous statement to the North Atlantic Council: âIt is highly desirable to establish in the near future a NATO Defense College for the training of individuals who will be needed to serve in key capacities in NATO Organizations.â

For the College, todayâs ceremony certainly paid fitting tribute to the role it has continued to fulfil, with pride and conviction, as the embodiment of General Eisenhowerâs vision and inspiration.