This website uses cookies to ensure we can provide you with the best browsing experience.
x
NDC - News- New Research Division Publication - Why NATO Needs a New Strategic Concept 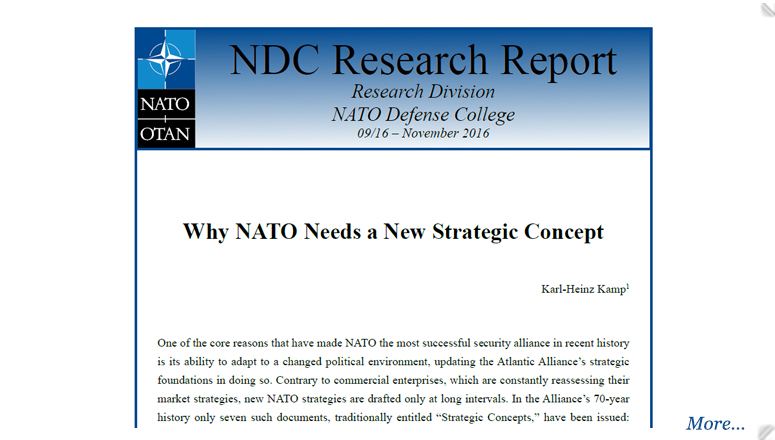 NATOâs current Strategic Concept was approved in 2010, at a time characterized by partnership relations with Russia, peace across Europe, and signals of democratic developments in the Arab world. Since 2014, however, the security situation in Europe has changed substantially. The European peace order that was established together with Russia after the end of the East-West conflict has ceased to exist â it has fallen prey to Russia's aggression in Eastern Europe. Hopes to establish cooperative security in the Middle East have been destroyed by civil wars, failed states, and Islamist terror. Tensions in the Asian-Pacific region could escalate to military conflicts crucially affecting vital interests of NATO member states. Most recently, the election of Donald Trump as US president might confront NATO with unprecedented internal challenges.

Given these profound changes in the international security landscape, collective defense and deterrence are back at the forefront of Alliance planning. We are, in fact, back in an âArticle-5 World.â Does this imply a need for a fundamental strategic debate about NATOâs future tasks and missions? Does NATO need to revise or replace its Strategic Concept and, if so, how should it be formulated and what elements should it contain? These questions are assessed in this NDC Research Report, written by my predecessor as Director of the NDC Research Division and current president of the Bundesakademie fÃ¼r Sicherheitspolitik in Berlin.

I hope this argument stimulates your thinking about grand strategy and whether the Alliance should tackle the subject prior to its upcoming 70th anniversary.