NATOâAdapting to the Changing Security Environment 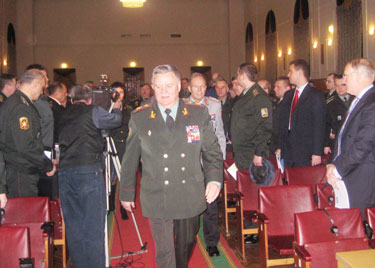 The Opening Ceremony was followed by a Press Conference in which journalists from different media â written, electronic and radio â participated.

The barrage of questions highlighted the Ukrainian public's hunger for information, and also the importance of the NATO Kyiv Week as a tool for correct information, provided through the explicit and clear answers from participants. In the context of the increasingly important NATO partnership with Ukraine, the purpose of the International Week is to promote better acquaintance with NATO, discuss the challenges facing the Atlantic Alliance and its partners in today's security environment, address a number of current key issues in the field of international security, and stress the value of strong ties between Ukraine and NATO.

The title of this year's event is "NATO â Adapting to the Changing Security Environment". The event is designed to meet the requirements of the Ukrainian National Defence Academy Curriculum, and at the same time to be a means of enhancing mutual understanding and achieving more fruitful cooperation.

During the Week eminent speakers from NATO, the NATO Defense College and other international institutions, among them the Deputy Chairman of the Military Committee Lt.Gen Karl EIKENBERRY, will lecture on the NATO organization and working methods, and also on international security issues.

The Seminar will be conducted with the same educational methodology applied in Rome, where the NATO Defense College has been located since 1966. As well as the traditional lecture in the morning, followed by a Q&A session, participants will have a unique opportunity for free exchanges of opinion with visiting NDC faculty advisors during the Committee work in the afternoon, in classes of no more than 15/20 students.

The weather may be wet and cold during this 9th Edition of the Kyiv Week, but some hot political topics, among them the future of NATO-Ukraine relations, have captured the interest of Ukrainian public opinion. A large number of Ukrainian journalists and TV crews took part in the traditional press conference that opened the week's events and was followed by dedicated interviews given by NDC Commandant Lt. Gen. Wolf-Dieter LOESER to several of the major Ukrainian media. The Commandant spoke about "NATO: Pros and Cons" during a popular programme broadcast by UTR, the Ukrainian nationwide television channel, and also gave interviews to Ukraine National Radio and other media, both written and electronic.

In the meantime, the academic programme is going ahead as planned and NDC teaching methodology, based on morning lectures and afternoon committee work, is being applied. The participants have attended a number of interesting lectures covering a variety of topics, such as "Energy Security", "NATO Transformation" and "NATO Missile Defence", the latter delivered by NDC's Director of Research Dr Karl-Heinz KAMP. The Committee work is of particular interest to members of the Ukrainian National Defense Academy, who are thus able to address questions on issues of direct interest to them to NDC representatives. This has resulted in dynamic exchanges of views and ideas.

Lt.General Karl EIKENBERRY, Deputy Chairman of the NATO Military Committee, was a keynote speaker during the closing day of the 9th Kyiv International Week, which has just concluded in the Ukrainian capital.

In his lecture entitled "The NATO Military Committee Agenda; Approaching the 60th Anniversary", General Eikenberry gave the audience of the Ukrainian National Defense Academy a vibrant update on the challenging missions the Alliance must be prepared to fulfil, including the development of an adequate military capability, as NATO is increasingly becoming a global security and stability provider. He also underlined the numerous results achieved in the past 60 years.

The presentation of the DCMC provided an excellent conclusion to the academic programme of the event, drawing together many elements which had been touched on in earlier sessions. Participants had the opportunity to hear from a wide variety of speakers including NDC personnel, senior NATO officials and external academics. The topics covered included elements of the changing security environment, and different aspects of NATO policy, organization and activity. A particular highlight for the audience was a lecture panel examining in detail the experience of new NATO members of the various stages of partnership with accession to, and membership of the Alliance. It was extremely useful to hear what Estonia and Poland had to say about the advantages of NATO membership, as well as the attendant obligations, notably in the military sphere. The Ukrainian participants demonstrated a high level of engagement throughout, consistently posing challenging, strategic and wide-ranging questions to the visiting speakers, and participating robustly in a series of seminar discussions with the NDC team which allowed issues such as NATO's relations with its special partners, Ukraine and Russia to be explored in greater depth.

In his closing remarks, the Commandant of the College, Lt. Gen. Wolf Dieter LOESER, highlighted the importance of the event and invited the Ukrainian side to formulate proposals in order to maintain the academic contents of the Week alive and updated.

As the NDC's foremost outreach programme, Kyiv Week has become an important tradition. The 2009 event was one more step towards mutual understanding and better human interaction, and both NDC personnel and the Ukrainian students left fully satisfied and with plenty of food for thought.