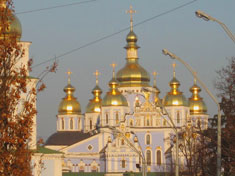 In the context of the increasingly important NATO partnership with Ukraine, the purpose of the International Week is to promote better acquaintance with NATO, discuss the challenges facing the Atlantic Alliance and its partners in todayâs security environment, address a number of current key issues in the field of international security, and stress the value of strong ties between Ukraine and NATO.

The title of this yearâs event is âNATO & Partners Addressing Security Challengesâ and it is designed to meet the requirements of the Ukrainian National Defence Academy Curriculum, and at the same time as a means of enhancing mutual understanding and achiev ing more fruitful cooperation.

During the Week eminent speakers from NATO, the NATO Defense College and other International institutions, among them the Chairman of Military Committee Gen Raymond HENAULT, will lecture on the NATO organization and working methods, and also on international security issues.

The Seminar will be conducted with the same educational methodology applied in Rome, where the NATO Defense College has been located since 1966. As well as the traditional lecture in the morning, followed by Q&A period, the participants will have a unique opportunity of free exchanges of opinion with visiting NDC faculty advisors during the Committee work in the afternoon, in classes of no more than 15/20 students.

The first snow of the season is falling over Kyiv â an incredible fact for a country, which is accustomed to cold and snowy winters. Nevertheless, other hot topics of political life, among them the future of the NATO â Ukraine relations have captured the interest of Ukrainian public opinion. Therefore, the traditional press conference which opened the 8 th edition of the Kyiv Week saw the participation of a large number of Ukrainian journalists and TV crews was followed by dedicated interviews by NDC leadership with a number of major Ukrainian media, e.g. NDC Dean Dr. HAMMOND spoke today on nation-wide UTR Ukrainian television in a popular programme âNATO: Pros and Consâ.

In the meantime, the academic programme is proceeding, as planned, and the NDCâs teaching methodology is being applied with lectures in the morning and committee work in the afternoon. The participants have been offered a number of interesting lectures covering a variety of topics, such as âThe Strategic Challenges of Current NATO Operationsâ, âNATO Transformationâ and âNATO Partnership Initiativesâ the latter being delivered by NDCâs Director of Research Dr. Karl-Heinz KAMP. The Committee work is of a particular interest to members of the Ukrainian National Defense Academy who are able to address questions on issues of direct interest to them to NDC representatives and there have been dynamic exchange of views and ideas.

General Raymond Henault, Chairman of the NATO Military Committee, was a keynote speaker during the closing day of the 8th Kyiv International Week, which has just concluded in the Ukrainian capital.

He addressed the audience of the Ukrainian National Defense Academy in a lecture entitled: âThe NATO Military Committee Agenda: Working Towards the Futureâ giving a vibrant update on the challenging missions the Alliance must be prepared to fulfill, including the need to develop an adequate military capability, as NATO is becoming a global security and stability provider.

The previous dayâs lectures and the discussions which followed were equally stimulating as the new NATO member representatives spoke about their respective experiences after joining the Alliance, as well as about the reform process which they had had to go through. Learning about the experiences of Ukraineâs neighbors as NATO members was particularly important to the audience of Ukrainian officers. The advantages of being part of NATO, as well as obligations resulting from membership in the Alliance, particularly in the military sphere, were of particular interest to the attending Ukrainian officers, who were afterwards able to discuss NATOâs relations with Ukraine and Russia â the Allianceâs special partners.

As the NDCâs most important outreach programme, Kyiv Week has become an important tradition. The 2008 event was one more step towards mutual understanding and better human interaction and both the NDC personnel and the Ukrainian students were fully satisfied and had plenty of food for thought.