The 46th iteration of the Conference of Commandants of Defence Academies (CoC 2017) took place at the Defence Academy of the United Kingdom (Shrivenham) from 20 to 22 June 2017. 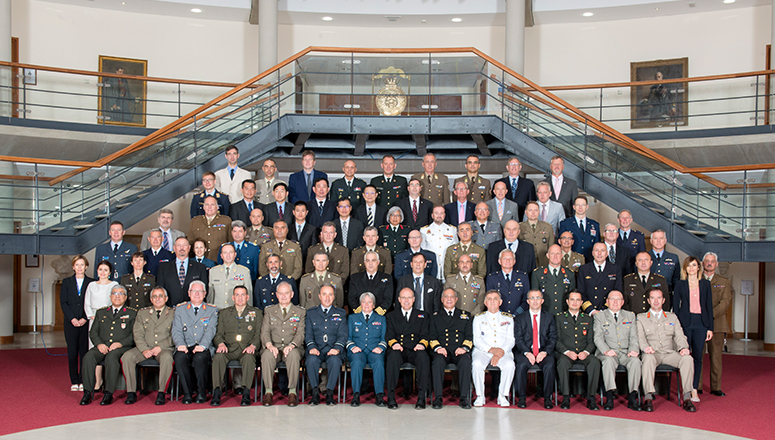 Details are now available in the restricted access area.

The 46th Conference of Commandants (CoC) was co-hosted by the NATO Defense College (NDC) and the Defence Academy of the United Kingdom and took place in Shrivenham, United Kingdom, from 20 to 22 June 2017. Despite the absence of any nations formally included in NATO Partnership programmes, due to political complications that were not resolved prior to the Conference and which affected the NDC in many ways, the 2017 edition was again a key moment for sharing NATOâs understanding of Professional Military Education (PME), as well as the realities and challenges that our nations are facing in this domain. With 23 countries and 35 institutions participating, the Conference of Commandants is one of the NDCâs most important annual outreach events, bringing together Defence Academies and War Colleges.

This yearâs theme focused on âFacing the Challenges of the 21st Centuryâ. The Conference was divided into two plenary sessions, on deterrence and resilience, each followed by syndicate discussion workshops. Both themes are topical and relevant since NATO members decided, in Wales and then in Warsaw, to strengthen their deterrence and defence postures, as well as committing to enhance resilience.

Productive and interactive as always, the CoC works as a clearing house and a forum, in which nations and Defence establishments can exchange and discuss a broad range of topics and share ideas and views to be implemented nationally. As for the NDC, the idea is to get the most out of this meeting, to better refine what is required from the College and what the College can offer that is not yet on our nationsâ âshopping listâ. In her concluding words, Lieutenant General Chris Whitecross underlined how relevant our militaries still are, serving as the real cornerstones of truly deterrent and resilient societies. Yet, there is still much to achieve and improve.