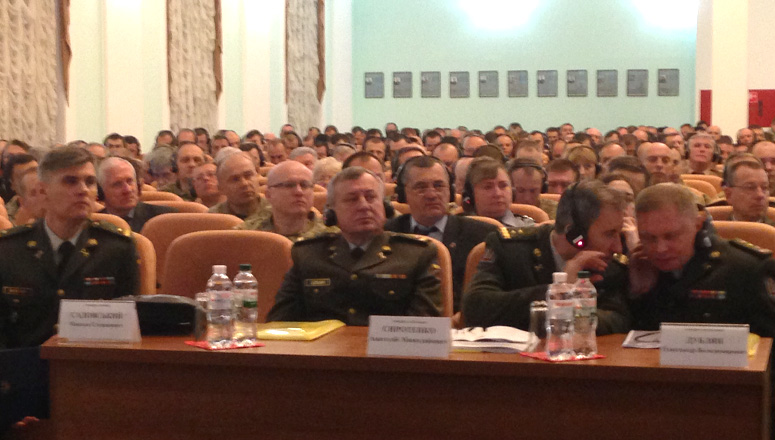 From 23-27 April 2018, the NATO Defense College (NDC) and the Ukrainian National Defense University (UNDU) ran the 18th edition of the International Kyiv Week.

NATOâs support to senior military education in Ukraine was set up in January 2000 by then Minister of Defence of Ukraine, His Excellency Mr Kuzmik, and Lord Robertson, NATO Secretary General at that time. The key feature of this support is International Kyiv week, which is an excellent opportunity to broaden mutual understanding between the NDC and Ukraine, our valued Partner.

UNDU students, and participants from the Ukrainian Ministry of Defence and General Staff, discussed the ways in which NATO nations control their armed forces using the instruments of devolution and decentralization, and the concept of Mission Command â all of which forms the basis of the NATO Operations Planning Process. The discussions further promoted participantsâ mutual understanding, enhancing their ability to think, plan and communicate while running the gamut from the strategic right through to the tactical and operational levels.

This yearâs programme focused on a younger generation of students, the leaders of the future, who will guide the adaptation of their defence and security in preparation for the uncertain security environment of the future. The NDC is proud and honoured to play a part in the education of these future leaders, and aims to help make them better prepared for whatever challenges the future may hold.

NATOâs International Kyiv Week plays a pivotal role in providing an in-depth understanding of the Alliance and a state-of-the-art approach to strategic-level education. As such, this event continues to heighten the mutual respect that exists between the Alliance and its long-standing partner, Ukraine.

Confucius once said: âWhen I walk along with two others, from at least one I will be able to learn.â The NDC, the UNDU and the whole of Ukraine all learned from each other during this eagerly awaited annual event, which fully lived up to expectations.