From 20 to 23 April 2008 the city of Toledo hosted the 37th annual Conference of Commandants, entitled "Comprehensive Approach to Security â the Role of Educators". The Conference, bringing together NATO and non-NATO military educators under the chairmanship of NDC Commandant Lt Gen Wolf Dieter Loeser, was held in close cooperation with the Centro Superior de Estudios de la Defensa Nacional (CESEDEN) of Spain. 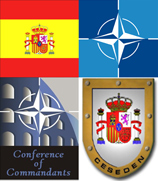 The Conference, inaugurated by Spanish Chief of Defence Staff General Felix Sanz, was attended by 122 representatives of 56 institutions from 45 different countries, including representatives from Afghanistan, Australia, the Inter American Defense College and the African Conference of Commandants, as well as traditional participants.

Participants agreed on the clear need for a Comprehensive Approach to Security. Military forces alone cannot deliver peace and stability in a complex international security environment that requires the concerted efforts of civil institutions, governmental and non-governmental organizations and institutions. It has become obvious that it is essential to include other participants in every phase of any operation we plan, not purely as interested observers but as stakeholders in the planning and actions to be implemented.

Toledo's Conference was a success not only in terms of participation but also because of the outstanding level of the speakers, panellists and discussions and the CESEDEN's superb organization of the event.