NATO International Kyiv Week 2019 focused on defence and military reform, emphasizing adaptation to NATO values and standards in order to be better prepared for the future. As well as defining the topic, the NDC selected the lecturers from NATO and the nations, ensuring a programme relevant to the region and to a wider audience. 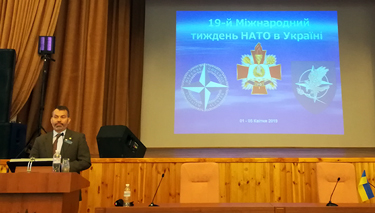 On 1st April, the NATO Defense College (NDC) and the Ukrainian National Defence University (UNDU) opened the 19th edition of the International Week in Kyiv.

BG Rolf WAGNER, Head Academic Planning and Policy Division at the NATO Defense College, together with Anatolii Petrenko, Deputy Minister of Defence for European Integration opened the 19th International Kyiv Week with the theme âNATO beyond the Brussels Summit and 21st Century Challengesâ.

This year, there were two combined keynote addresses, the first by the Ambassador of the United Kingdom & Northern Ireland to Ukraine, H.E. Ms Judith Gough and the Canadian Ambassador to Ukraine, H.E. Mr Roman Waschuk, and the second by Lieutenant General Jan Broeks, Director General of the NATO International Military Staff (DGIMS) and Mr Alexander Vinnikov Head of the NATO Representation to Ukraine (NLO).

Dr Marianoâs closing remarks reviewed the overall importance of education and focused specifically on major topics covered at the International Week: outcomes of the 2018 Brussels Summit; the challenges of hybrid warfare; and the NATO Crisis Management and Operations Planning Process, with specific attention to defence and military transformation. In the second part of the week, there was detailed discussion of how to reform defence logistics and planning, as well as national C2 systems.

NATO International Kyiv Week contributes significantly to ensuring a strong, relevant basis for long-term adaptation. Preparation is now under way for the 2020 edition, which will mark the 20th anniversary of NATO-Ukraine educational cooperation.