On 8th November, NRCC Course Members travelled to Naples to spend 2-days at JFC Naples to learn about the challenges related to NATOâs Strategic Direction South, and to visit the Joint Operations Centre. On the first day, NRCC-18 was welcomed by JFC Naples Chief of Staff, Lt General Portolano (ITA) who gave a briefing on the JFCâs main missions and structures. Gen Angius (ITA) and his deputy, Col Asselin (FRA), introduced Course Members to the newly established NATO Strategic Direction South (NSD-S) Hub responsible for improving NATOâs situational awareness and understanding of the opportunities and challenges coming from the south, while contributing to the overall coordination of NATOâs activities and efforts. 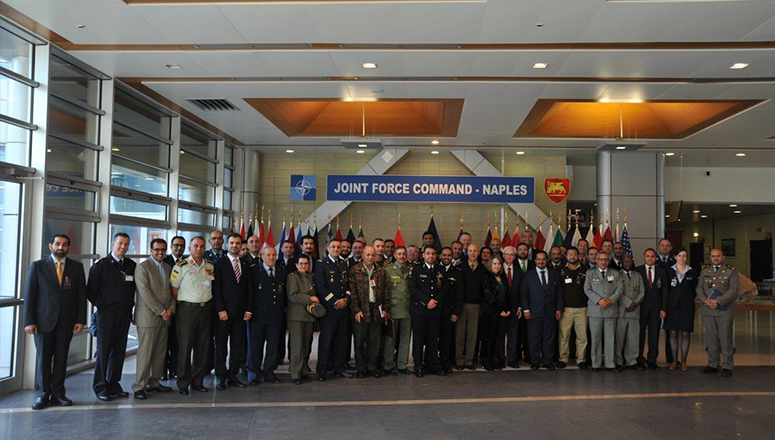 On the second day, JFC Naples Political Advisor, Dr McNulty (GBR) and NSD-S Hub leaders organized a panel discussion with NRCC Course Members to discuss and share perspectives and analyses on the main challenges faced by NATO and its partners in the Southern region.

Course Members started the final day with a tour of the US Naval base in Gricignano. Later, at the University of Naples âLâOrientaleâ, a comprehensive lecture was given by Professor Giuseppe Cataldi on the current topic of migration in the Mediterranean, focusing on humanitarian aspects, as well as on issues related to international law. Course Members were then invited to discuss and share their own views in a panel discussion with Professor Cataldiâs students.

On Monday, 13 November, NRCC-18 visited the Synagogue and Jewish Museum of Rome, thereby wrapping up the interreligious programme that started two weeks ago with a visit to the Summer Residence of the Pope and to the Grand Mosque of Rome. Course Members also attended several lectures introducing them to the three monotheistic religions, as well as to issues related to the politicization of religion. Dr Hillel Newman (ISR), a Counselor for World Jewry and the Inter-Faith Division of the Israeli Ministry of Foreign Affairs, and former Ambassador of the State of Israel to the Republics of Uzbekistan and Tajikistan, presented the main principles of Judaism, and highlighted some aspects in the daily routine of Jewish believers. He also outlined the history of Judaism as the traditional faith of the Jewish people and explained the secular-religious status quo in Israel today. The second presentation was delivered by Father Basanese (FRA), Director of the Centre for Interreligious Studies at the Gregorian University, Rome and an expert in Arab-Christian theological writings, who discussed the main precepts of Christianity, with an emphasis on the philosophical and theological aspects. The third and last lecture was given by Imam Isa Benassi (ITA), from the Italian Islamic Religious Community, who explored the main tenets of Islam, stressing how Islam encourages believers to practice their faith in harmony with society, and clarifying Islamâs position on terrorism and the jihad; explaining that Islam does not contradict any kind of political regime.

Course Members continued debating this topic the next day, when they attended two lectures given by Drs Ate? Alt?nordu (TUR) and Olivier Roy (FRA) on the politicization of religion. Both lecturers discussed the historical background, current trends, and how the global security environment is affected by the interaction between religion and politics.