On Thursday 2nd October, the NATO Defense College (NDC) had the privilege of welcoming H.E the Ambassador of the Republic of Iraq to Italy, Dr Saywan Barzani, who delivered a lecture to the members of the twelfth NATO Regional Cooperation Course (NRCC-12) on the current situation in Iraq. 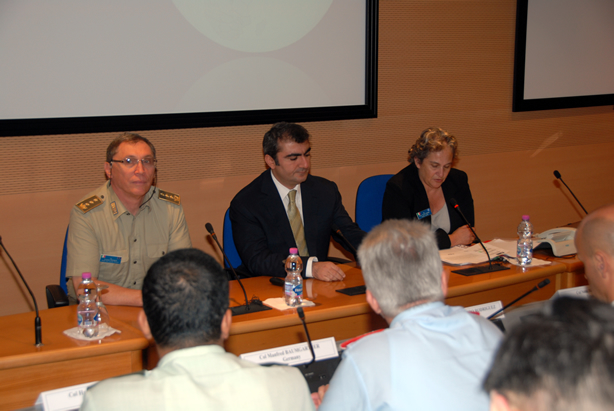 Upon arrival, the Ambassador was welcomed by the Dean, Dr Daria Daniels Skodnik (SVN C), and the Head of the Middle East Faculty, Col Giuseppe Morabito (ITA A).

The first lecture of the day was given by Zarvan Raniero Owsia, representing the International Committee of the Red Cross (ICRC) since April 2001, and also a delegate to the armed forces - Europe in Belgrade since 2009, who spoke about relations between non-governmental organizations and the media.

Later, Ambassador Barzani updated Course Members and H.E. the Ambassador of the League of Arab States, Nassif Hitti, on current events in Iraq. The speaker focused on the history of Iraq up to the present day, underlining the importance of this background for an informed understanding of current developments in the Middle East.

A lively Q&A session followed, which provided an opportunity for discussing a number of important subjects.

The third lecture of the day was given by the Vice Rector of the University of Naples âL'Orientaleâ and full Professor of International Law, Prof Giuseppe Cataldi, who holds a number of important and prestigious positions internationally. He gave a comprehensive overview of piracy as a security problem.

Ambassador Barzani was born in 1972 in Erbil, in the Iraqi Kurdistan Region. He graduated in Law from the University of OrlÃ©ans (France) and also holds a Masterâs and a PhD in Political Science - International Relations and Diplomacy from the University of Paris I PanthÃ©on â Sorbonne. Ambassador BARZANI started his career in 1992 as Coordinator of the Public Relations office in Erbil, and in 1997 became a KDP representative for Europe. He held the post of Regional Government Representative from Kurdistan from 1998 to 2008. In July 2009, he was appointed Ambassador by the National Iraqi Council; since 2010, he has been Ambassador Extraordinary and Plenipotentiary of the Republic of Iraq to Italy and non-resident Ambassador to Malta.