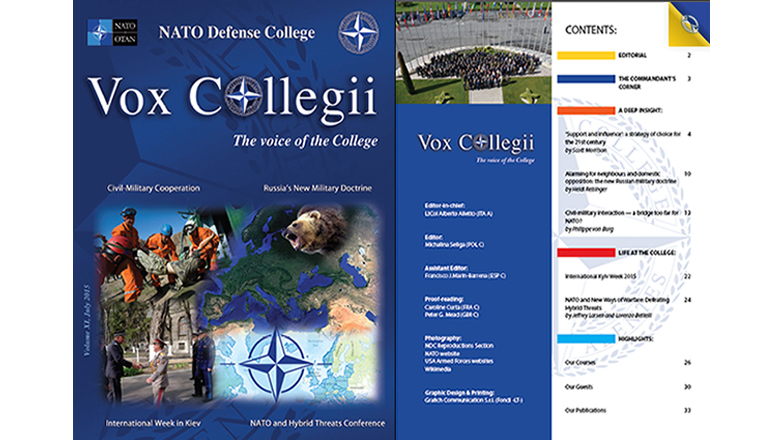 The NATO Defense College is happy to announce the publication of the eleventh issue of the twice-yearly College magazine. The editorial team hopes that our readers will find plenty of interesting material on current affairs, as we continue to share critical insights on stimulating and controversial topics. We are grateful to all of you for your continuing support, and your positive feedback is a source of great satisfaction.

Since we last went to press in January, there have been a lot of changes in the College. The highlight of the year was the âDefeating Hybrid Threatsâ Conference held on 29-30 April. This was a âfirst of its kindâ event in the life of the NDC and the response from participants and guests was extremely positive.

Another major event in recent months was International Kyiv Week 2015, which we organize every year in conjunction with the National Defence University of Ukraine (UNDU), and the support of the NATO School Oberammergau (NSO). The event first took place in 2001, with the aim of broadening knowledge on NATOâs mission, the challenges it faces, and strengthening the partnership between Ukraine and NATO.

Last but not least, the 44rd Conference of Commandants (CoC) of Defence Academies and Institutes was held from 29 June to 1 July, at the Austrian National Defence Academy in Vienna. It was co-chaired by the Commandant of the NATO Defense College Major General Janusz Bojarski (POL) and the Commandant of the Austrian National Defence Academy, Lieutenant General Erich Csitkovits (AUT). The aim of CoC 2015 was to promote continued dialogue between NATO and Partner nations, and discuss how military education can be better applied to enhance intellectual interoperability.

Moving on to the magazine, this time the choice of articles pertains to challenges triggered by Russiaâs new military doctrine, as well as to ways of expanding and promoting civil-military cooperation. A PDF version of Vox Collegii is available for the convenience of our readers. We are looking forward to receiving your feedback on Volume XI.