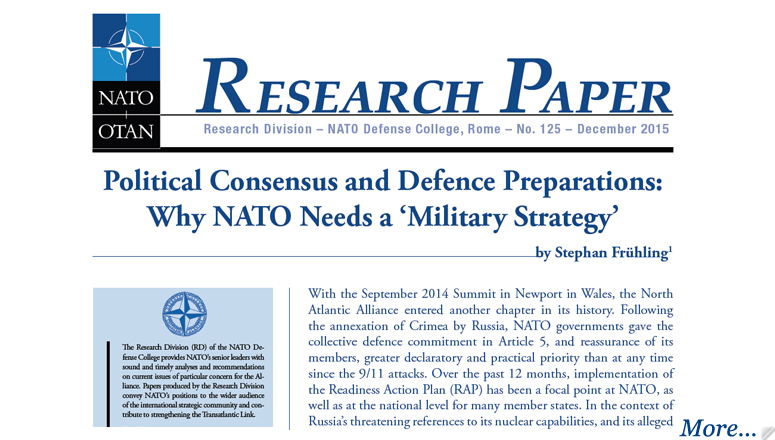 Dear Reader,
The latest NDC Research Paper by Stephan Frühling of the Australian National University (and our Partners across the Globe Research Fellow for 2015) discusses the issues and constraints facing the Allies as they chart their future at their next summit meeting in Warsaw. NATOâs agreement on âadaptationâ and âreassuranceâ measures were a central feature of the 2014 Wales Summit, which confirmed that collective defense remains the core task of the Alliance. Whether these measures have been sufficient to restore NATOâs ability to deter and defend its members, especially along the Eastern flank, remains a subject of ongoing debate in the lead-up to the 2016 Summit in Warsaw.

In this Research Paper, Dr Stephan Frühling shows how the Wales Summit decisions were successful in the short term, but, he contends, are too wedded to the political symbolism of what are, in the end, relatively small changes to NATOâs overall force structure and posture. Rather than seeking political consensus on the basis of tactical instruments, he argues NATO should instead focus on developing a new, public âMilitary Strategyâ document, which would provide a framework for aligning all of the member statesâ capabilities and posture to the new security environment.