New Research Division Publication - Towards Self Sufficiency?
Economics as a Dimension of Russian Security and the National Security Strategy of the Russian Federation to 2020 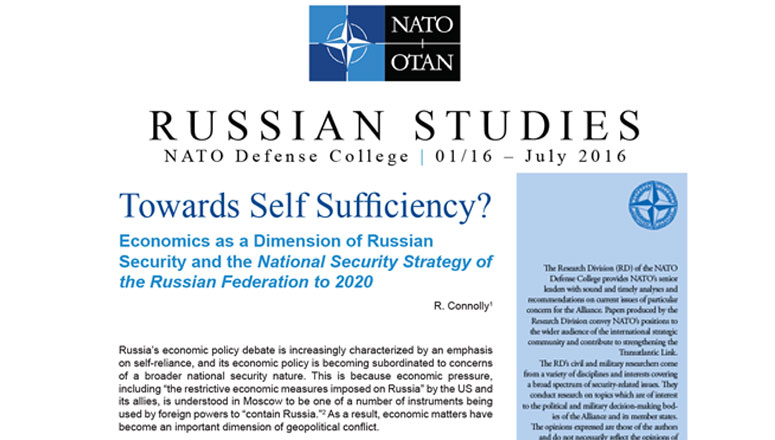 Welcome to Russian Studies, a new publication series that we are pleased to announce. Russian Studies will review key documents produced by the Russians government in order to better understand NATOâs important and increasingly challenging neighbour to the East. The series will be edited by Dr. Andrew Monaghan, a former member of the NDC Research Division staff and currently associated with Chatham House in London. Andrew will select the topics and authors for this series from his large base of experts on Russia and Eastern Europe, and will do the bulk of the editing work. We are pleased to be collaborating with Dr. Monaghan in this effort.

In fact, this series is in some ways a rejuvenation of the series formerly called Russian Review that Andrew and his colleagues at the NDC published from 2008-2012, but which was suspended for several years. We hope the new series will find an equal number of interested readers, and that its slightly broadened focus will cover even more issues.

The first issue in Russian Studies was prepared by Dr. Richard Connolly of the University of Birmingham. Richard addresses the economic aspects of national security policy as seen by the Kremlin. As he puts it, Russiaâs economic policy debate is increasingly characterized by an emphasis on self-reliance, and its economic policy is becoming subordinated to concerns of a broader national security nature. The reason, he argues, is because economic pressure, including the restrictive economic measures imposed on Russia by the US and its allies, is understood in Moscow to be one of a number of instruments being used by foreign powers to contain Russia. As a result, economic matters have become an important dimension of geopolitical conflict.

Connollyâs essay reviews Russian official state strategy documents, particularly the National Security Strategy of the Russian Federation published in 2015 and the Food Doctrine published in 2010, incorporating economic policy developments to show how economic securitization is underway and is gathering momentum. The economic securitization described here refers to an increasingly obvious tendency among Russian policy-makers towards using national security concerns to justify new and qualitatively different approaches to economic policy. The scope and impact of a securitized approach to economic policy has evolved considerably in recent years. Thinking in terms of securitization allows an analysis of the changing nature and extent of debate, even disagreement in policy-making, the obstacles to the implementation of the agenda, and, ultimately, the identity and relative political power of countervailing forces in Russiaâs political economy. As such, it moves beyond simplistic suggestions that Russia is remilitarizing, or the binary position that if Russia is not making steady and even progress towards a market economy then it is regressing to an authoritarian form of state capitalism at best, and a centrally planned economy at worst. Instead, the focus is on the nature of the qualitatively new system.

The result, therefore, is a more nuanced picture of the economic situation in Russia and the policy priorities of the Russian leadership, one that permits a focus on which sectors are, or are becoming, securitized, and which are not. The implicit emphasis on identifying instances of âsectoral securitizationâ tells us more about what is changing in Russiaâs political economy, but also what remains the same, such as relative economic freedom in other areas of the economy unaffected by the securitization discourse.

As Richard summarizes, official thinking about economic policy in Russia is evolving significantly and is becoming increasingly shaped by national security concerns. These concerns are part of a wider effort to mobilize the stateâs resources in response to what Moscow sees as an increasingly unstable and threatening international environment. While some of these tendencies were previously evident, the trend has visibly accelerated during the last five years. Reducing Russiaâs dependence on imported products and services is now considered a key component of Russiaâs national security.

We hope you enjoy learning more about the Russian economy and its role in shaping Moscow thinks about security.