This website uses cookies to ensure we can provide you with the best browsing experience.
x
NDC - News- New RD Publication: <i>European defence: what impact for NATO?</i> 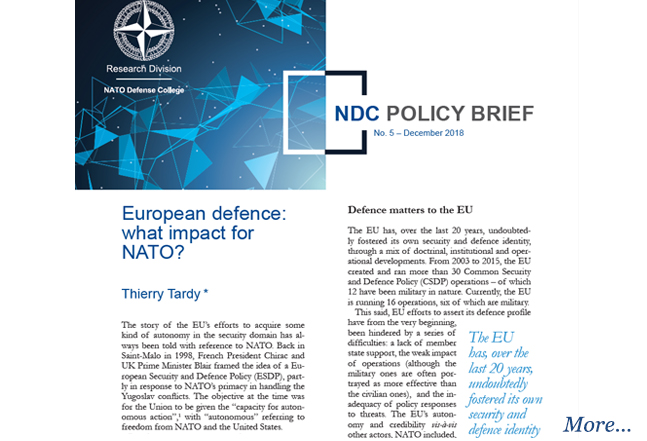 "The story of the EUâs efforts to acquire some kind of autonomy in the security domain has always been told with reference to NATO. Back in Saint-Malo in 1998, French President Chirac and UK Prime Minister Blair framed the idea of a European Security and Defence Policy (ESDP), partly in response to NATOâs primacy in handling the Yugoslav conflicts. The objective at the time was for the Union to be given the âcapacity for autonomous actionâ,1 with âautonomousâ referring to freedom from NATO and the United States.
In this endeavour, the perception in NATO has always oscillated between indifference vis-Ã -vis a process that did not seem credible, and concern that an increased EU role in defence could undermine NATOâs centrality and the transatlantic link.
Over the last few years, the EU has embarked upon a process of beefing up its defence profile, raising anxieties in NATO circles. Most recently, references to the need for Europe to acquire strategic autonomy or to move towards a European army, have added to the concerns. But are there reasons for NATO to worry about what the EU and its member states are doing? Is the EU aspiration in defence threatening the transatlantic link? Does the EU have the power to unsettle NATO?"
1 Franco-British Summit, Final Declaration, Saint-Malo, 4 December 1998.