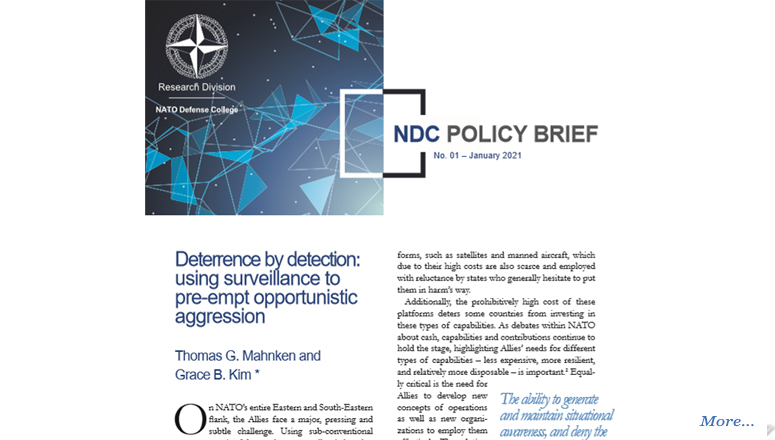 "On NATOâs entire Eastern and South-Eastern flank, the Allies face a major, pressing and subtle challenge. Using sub-conventional grey zone tactics, Moscow has repeatedly tried, and at times succeeded, in expanding its influence, eroding international norms, undermining the rules-based international order, and shifting the balance of power in its favour. Preventing Russia from launching such opportunistic acts of aggression is particularly important because its armed forces are developing the ability to attack quickly â under the cover of increasingly capable defences â countries on their periphery in a clear effort to impose a fait accompli.1 NATO countries are at a particular disadvantage in this type of competition. Their force structures consist of expensive and technologically complex information-gathering platforms, such as satellites and manned aircraft, which due to their high costs are also scarce and employed with reluctance by states who generally hesitate to put them in harmâs way.

Additionally, the prohibitively high cost of these platforms deters some countries from investing in these types of capabilities. As debates within NATO about cash, capabilities and contributions continue to hold the stage, highlighting Alliesâ needs for different types of capabilities â less expensive, more resilient, and relatively more disposable â is important.2 Equally critical is the need for Allies to develop new concepts of operations as well as new organizations to employ them effectively. The solution may not involve fielding exotic new capabilities so much as employing existing ones in innovative ways. It will also benefit greatly from approaches that allow Allies and partners to participate fully. If we do not adapt, we risk being surprised by potentially catastrophic events in a future conflict."