This website uses cookies to ensure we can provide you with the best browsing experience.
x
NDC - News- European allies and the forthcoming NATO strategic concept 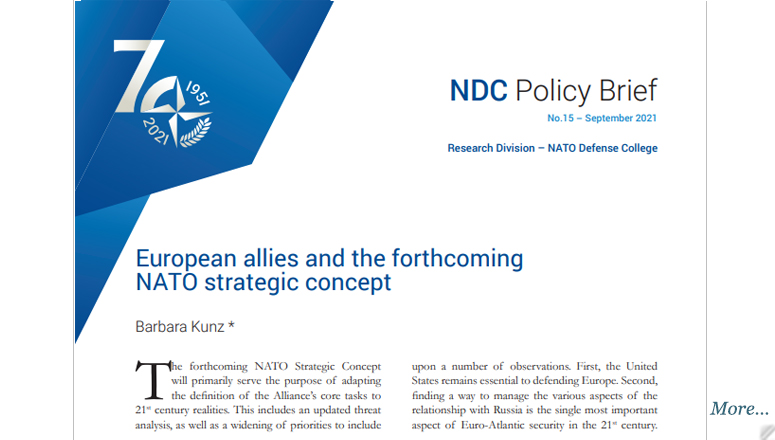 The forthcoming NATO Strategic Concept will primarily serve the purpose of adapting the definition of the Allianceâs core tasks to 21st century realities. This includes an updated threat analysis, as well as a widening of priorities to include matters and domains such as cybersecurity and soci etal resilience. It will, in many ways, also reflect the considerable changes European security underwent since the publication of its preceding Strategic Con cept in 2010. It will therefore be the first post-Crimea Strategic Concept, and mark the end of a cooperative security approach to Russia. The new text will also be the first post-Trump administration document, one elaborated after a period of profound doubts over US commitment to the Alliance. Finally, the new Strate gic Concept will be adopted after years of sometimes heated debates on European security, particularly on the notion of European strategic autonomy. While a consensus on this concept and its implications for the Atlantic Alliance has thus far proved elusive, it seems clear that Europeans increasingly understand the need for a stronger, and in many ways more independent Europe. To some, recent events in Afghanistan may also have been a wake-up call. In reality, however, most of these developments are structural in nature, and have persisted for some time.

Against this backdrop, European thinking â both among European NATO members, and partner countries such as Sweden and Finland â about the forthcoming NATO Strategic Concept should build upon a number of observations. First, the United States remains essential to defending Europe. Second, finding a way to manage the various aspects of the relationship with Russia is the single most important aspect of Euro-Atlantic security in the 21st century. Third, strengthening Europe as a security and defence actor is of primary importance. Whether this happens under the European strategic autonomy label or another catchphrase is secondary.

* (back) Senior Researcher at the Institute for Peace Research and Security Policy at the University of Hamburg (IFSH).