This website uses cookies to ensure we can provide you with the best browsing experience.
x
NDC - News- Strategic Shifts and NATOâs new Strategic Concept 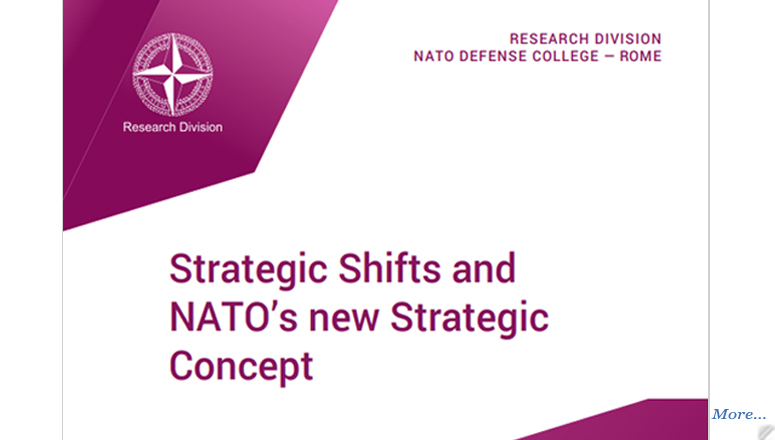 Foreword
At the 2022 Madrid Summit, NATO Leaders are adopting a new Strategic Concept â the Allianceâs top political guidance. Second only to the North Atlantic Treaty itself, the Strategic Concept is a key document for NATO. It reaffirms the Allianceâs values and purpose, provides a collective assessment of the security environment and drives its strategic adaptation.

In its timely analysis, the NATO Defense Collegeâs Research Division emphasizes the systemic shifts occurring in the Allianceâs broader strategic landscape and highlights the need for NATOâs new strategy to reflect them in full. The report rightly states that the central assumptions that shaped NATOâs post-Cold War Strategic Concepts â dating, respectively, back to 1991, 1999 and 2010 â have been either undermined or shattered over the past decade. In particular, the notions of the Euro-Atlantic area being at peace, the absence of Great Power competition globally and the predictable and cooperative nature of the international security order seem ill-suited to describe the current security environment.

Today, Russiaâs horrific war of aggression against Ukraine brought all-out war back to Europe, contributing to a broader deterioration of Euro-Atlantic peace and security. More broadly, rising strategic competition and an increasing push-back against the rules-based international order characterize the global security environment. The paper zooms in on the transformative impact of strategic competition on the Allianceâs broader security environment and further highlights how the rise of China, technological acceleration and climate change will profoundly reshape the world and impact on NATOâs core tasks and priorities.

The authors stress that â[t]he current phase in NATOâs existence is largely unique and closer to the challenges the Alliance faced upon its foundation rather than those that emerged after the end of the Cold Warâ. At the same time, they also highlight that the world is now fundamentally different. NATO faces non-traditional security threats and challenges that are global, interconnected, and transnational: from terrorism, to cyber threats, and from energy vulnerabilities and dependencies to the impact of climate change on Allied security.

This is why the 2022 Strategic Concept must provide guidance to navigate the complexity xvi Strategic Shifts and NATOâs new Strategic Concept of the current security environment and prepare the Alliance for a more contested and competitive world. One of the reportâs main policy takeaways is that the Alliance is yet again at a strategic juncture in its history and this will require prioritization. Specifically, NATO will need to continue bolstering its deterrence and defense posture, which is essential to ensuring the collective defense of Allies. At the same time, the Alliance will need to continue investing in crisis management and cooperative security while adapting these tasks to meet its changing security needs. A second important notion reflected in the analysis is that NATO will need to place a strong emphasis on retaining and strengthening its technological edge to both stay ahead of its potential competitors, but also to fully leverage the opportunities emerging technologies can bring.

In readying itself for the future, NATO should build on the considerable military and political adaptation it has undertaken over the past decade. This is aimed at reinforcing the Allianceâs deterrence and defense posture, strengthening and broadening its political role, investing in resilience, sharpening its technological edge and strengthening its global approach and cooperation with partners, both in its neighborhood and further afield. It should also reaffirm and strengthen its foundations: namely its common values â democracy, individual freedom, human rights and the rule of law â and the essential role of the transatlantic bond to ensuring the security and defense of Allies.