This website uses cookies to ensure we can provide you with the best browsing experience.
x
NDC - News- NATOâs New Strategic Concept 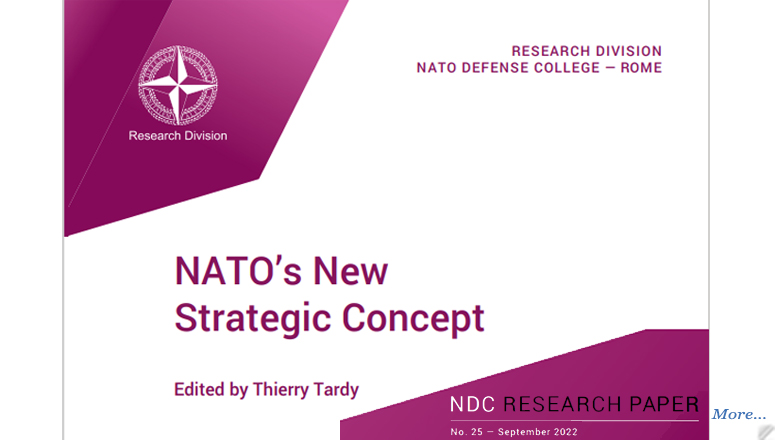 NATOâs Strategic Concept aims to define the Allianceâs vision for the coming decade. It lays out the security challenges facing the Alliance and outlines the political and military tasks that NATO must carry out to address them. As such, the Concept is not an Action Plan, nor does it aim to offer policy options for Allies. Its objective is strategic; its main purpose is to define what NATO stands for and to communicate this to a broad audience both within and beyond the Alliance.

The process through which the Strategic Concept is drafted, adopted, and finally released enables Allies and observers to reflect on the rationale of such a document. This includes the objectives that a strategic-level document serves, the pitfalls these documents must avoid, and, once released, the vision that it offers, as well as the opportunities it has possibly missed.1

The 2022 NATO Strategic Concept was of course drafted during a particular historical moment. While a semi-formal process began at the end of 2019, when the London Leadersâ Meeting mandated the NATO Secretary General to establish a reflection group,2 the final document itself was directly and fundamentally shaped by Russiaâs February 2022 invasion of Ukraine.

A decade ago, the 2010 NATO Strategic Concept stated, âthe Euro-Atlantic area is at peace and the threat of a conventional attack against NATO territory is lowâ.3 In 2022, this is obviously no longer the case. While the Alliance itself has not faced military attack, war has returned to Europe. Russia has not only blatantly violated principles and values that NATO Allies stand for, it has also raised the plausibility of a conflict directly involving NATO. Not since the Cold War has the threat of war against the Alliance been so real. Indeed, the 2022 Strategic Concept states that âThe Euro-Atlantic area is not at peaceâ (para.6) and that âan attack against Alliesâ sovereignty and territorial integrityâ cannot be discounted (para.6). Russia is depicted as the âmost significant and direct threat to Alliesâ security and to peace and stability in the Euro-Atlantic areaâ (para.8). Inevitably, the war in Ukraine bluntly interrogates NATOâs purpose, including how it can deter Russia from attacking Allies and how it should defend itself if need be.

These dangers have prompted Allies to initiate a reset of their posture that re-prioritises collective defence and a âdeterrence and defenceâ agenda. The era of NATO crisis management operations, in Afghanistan and elsewhere, is over. And while the new Concept maintains the three core tasks (deterrence and defence, crisis management, and cooperative security) as defined in the 2010 document, these are subordinated as âcomplementary to ensure the collective defence and security of all Alliesâ (para.4).

That being said, the international security environment still presents broader challenges than Russia alone. In the 2022 Concept, drafters have therefore balanced their emphasis on Russiaâs aggression against Ukraine by identifying other challenges NATO faces and assessing their impact on the Alliance. For instance, consider the issue of terrorism, characterised in the new Concept as âthe most direct asymmetric threat to the security of our citizens and to international peace and prosperityâ (para.10), or the issue of âpervasive insecurityâ, which NATO sees emanating from its Southern neighbourhood. Indeed, the Concept insists on a 360-degree approach, in which collective defence is not unidirectional. Most importantly, for the first time ever, the new Concept mentions China, stating that its policies challenge Allied âsecurity and valuesâ. China does not make it to the category of âthreatâ, yet the way the document presents China conveys much about how Beijing is perceived (at least by some Allies).

How, then, does the new Concept define the strategic environment and how must the Alliance adapt? What are the core tasks that NATO must fulfil, and how do recent global developments impact the Allianceâs raison dâÃªtre, cohesion, and identity? Is the new Concept evolutionary or revolutionary? Does it offer a vision or a snapshot? To what extent will it shape NATOâs mandate in terms of balancing the Eastern flank versus the South, in dealing with China, and in handling issues such as hybrid warfare, the climate crisis, emerging technologies, and resilience? Lastly, what are its possible weak points and likely implementation challenges?

These are the issues that the six authors of this Research Paper examine. These authors â namely, Patrick Keller, Stanley Sloan, Bruno Tertrais, Mark Webber, Marcin Zaborowski, and Thierry Tardy â are academics and researchers hailing from five different countries. They present their own views on the Strategic Concept, deciphering what it says about the Alliance, what it does not say, and how it prepares the Alliance to adapt to the coming decade.

Overall, four issues stand out in the following chapters. First, the new Strategic Concept is concise, clear, and focused; it is the result of a broad consultation process and offers a mix of continuity and disruption â for instance, keeping the three core tasks while taking into account an evolving security environment. As such, it successfully conveys the sense of cohesion and unity that the Alliance constantly craves.

Second, in contrast to the 2010 document, the new Concept is clear-eyed regarding the nature of the international security environment, buffeted by the return of strategic competition and the renewed Russian threat to Europe. The document marks the return of collective defence, though Allies have refrained from overemphasizing confrontation with Russia. In this context, the text tends to overlook threats emanating from NATOâs Southern flank.

Third, China is included in a NATO Strategic Concept for the first time â not quite as an explicit threat but nonetheless portrayed as such. What this implies for the Alliance, however, remains unsaid. There is an understanding that China poses a number of problems to the Alliance and its member states, yet how and where NATO can or will respond is still to be defined. Nevertheless, the very fact that the Concept mentions China indicates a shift in Alliance policy.

Finally, while the Concept depicts a rather large security agenda for the coming decade, with threats and challenges ranging from hard security to softer human security-related issues, it is largely silent on NATOâs internal cohesion and on the ways this cohesion is potentially undermined from within, be it by its own governments or peoples. The Concept largely refers to âNATO valuesâ and how they matter to transatlantic security. In the face of current threats, then, it stands out as an interest-focused document rather than one which offers a strategic vision, articulated around shared values and what NATO will stand for in the coming decade.