This website uses cookies to ensure we can provide you with the best browsing experience.
x
NDC - News- France in NATO - An evolving Gaullian agenda 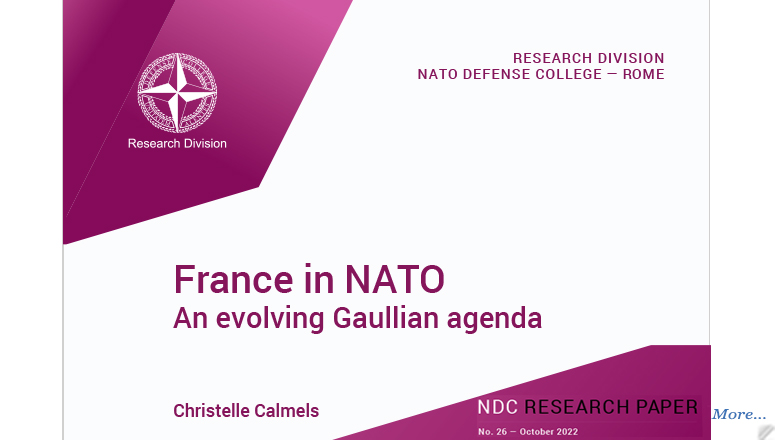 On November 7, 2019, French President Emmanuel Macron declared to The Economist: âTo my mind, what we are currently experiencing is the brain death of NATO. We have to be lucidâ.1 Macronâs lament regarding NATOâs loss of political and strategic purpose occurred against the backdrop of a crisis of multilateralism, one fuelled by national governmentsâ growing discontent and disinvestment from international organisations. This precarious situation deteriorated further with the outbreak of a worldwide pandemic, which revealed the difficulties international organisations face when coping with global crises.

In early 2022, the situation had not improved. While the health crisis remains ongoing, multilateralism is today bogged down by new and lingering challenges. The chaotic US withdrawal from Afghanistan in August 2021 and the Talibanâs subsequent return to power in Kabul have exacerbated the bitter failure of NATOâs out of area ventures. The September 2021 Australia-UK-US (AUKUS) submarine deal has also shaken the transatlantic bond, undermining Franco-American relations just as Western Allies seek to reconfigure their Indo-Pacific strategies.

In that regard, the case of France is an appropriate entry point considering its global clout and multilateral activism. While critical of some international organisations, France remains a vocal proponent of multilateralism, having called for an âalliance for multilateralismâ that defends âa multilateral order based on respect for international lawâ.2 With the implementation of Brexit, moreover, France now benefits from a unique position in the international system: it is the only state to possess a permanent seat in the United Nations Security Council (UNSC) and enjoy membership within both the European Union (EU) and NATO.