New Research Division Publication: "Towards a Dual Fleet? The Maritime Doctrine of the Russian Federation and the Modernisation of Russian Naval Capabilities" 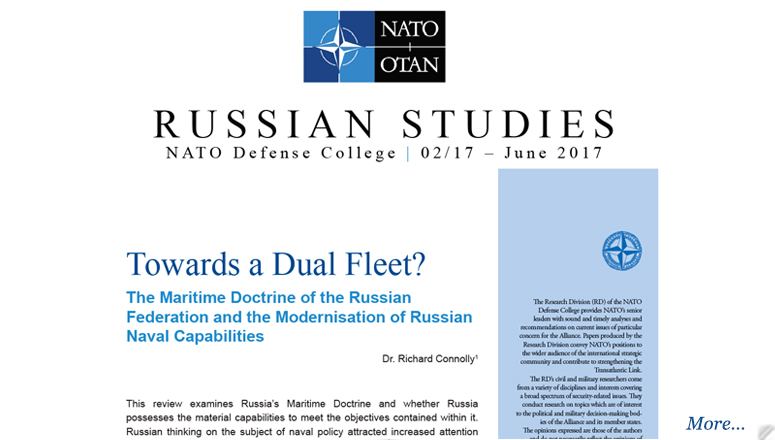 This review examines Russiaâs Maritime Doctrine and whether Russia possesses the material capabilities to meet the objectives contained within it. Russian thinking on the subject of naval policy attracted increased attention after the deployment of the aircraft-carrying cruiser, the Admiral Kuznetsov, to the eastern Mediterranean in autumn 2016. This surprised some observers, and served as a vivid demonstration of an increasingly assertive Russian foreign and security policy. However, the deployment of naval force to the Mediterranean would not have surprised those familiar with the updated maritime doctrine that was published in July 2015. Taken as a whole, the doctrine sheds light on the role that the Russian leadership envisages for the navy in supporting Russiaâs pursuit of its wider security, economic and foreign policy objectives.

This paper reviews the new Maritime Doctrine. First it sketches out a comparison with the previous edition, published in 2001, and assesses the key objectives outlined in the new 2015 version. It then turns to examine the progress in implementing what is an ambitious naval modernization programme, along with an assessment of how this programme has been affected by financial and industrial constraints, and whether the naval force structure that is emerging is fit for the purpose of realizing Russiaâs maritime ambitions.

As we begin the second year of the rejuvenated Russian Studies series, I want to thank Dr. Andrew Monaghan for serving as the seriesâ managing editor.

We hope you enjoy this review of Russian doctrine.
Regards,
Jeff