Call for applications for the
Early-Career Nuclear Strategists Workshop 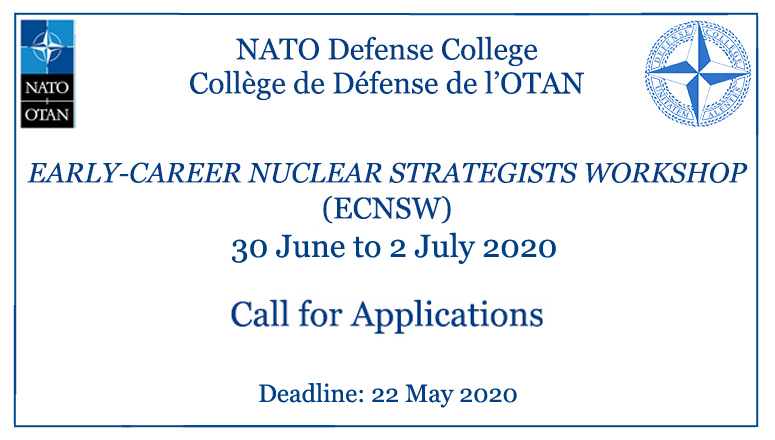 The NATO Defense College (NDC) is opening a Call for applications for the second edition of its Early-Career Nuclear Strategists Workshop (ECNSW). Applicants should be nationals of a NATO country, under the age of 40, and either enrolled in a PhD programme (any discipline) or already hold a PhD. Given the current COVID-19 emergency, this yearâs edition will be held online.

The workshop aims at enhancing and disseminating the necessary competencies, understanding and skills with regard to the concept and practice of nuclear deterrence, in order to forge a new generation of nuclear strategists.
The workshop has three main goals: Application process

Candidates are invited to send their application by email to ecnsw@ndc.nato.int by 22 May 2020, including a one-page CV, a one-page cover letter illustrating their interest and past experience, as well as to submit a 300-word abstract of the paper they wish to present.
Policy-makers and members of the Armed Forces are welcome to apply as non-presenting participants.

During the Cold War, nuclear strategy played an integral part in the NATO-USSR confrontation. The fear of mutually assured destruction, along with NATO’s nuclear superiority, prevented the two blocks from engaging in a large-scale all-encompassing conflict. After the collapse of the Soviet Union, however, the world changed dramatically: although more players acquired nuclear capabilities, the knowledge and expertise on nuclear issues and deterrence progressively atrophied – due not least to the focus on other security issues and threats. Composed of different factors, nuclear deterrence requires specific competencies, understanding and skills from scholars and practitioners. Today, we are witnessing the return of the nuclear dimension into what has become an increasingly complex and constantly evolving global security environment. The progressive disintegration of multinational cooperation on arms control, the erosion of the INF Treaty, and the undecided fate of the New START Treaty, add uncertainty to this picture. For these reasons, a renewed emphasis on nuclear issues, in general, and on nuclear deterrence in particular, is needed. As stated in the 2010 Strategic Concept, NATO “will remain a nuclear alliance as long as there are nuclear weapons in the world”. Thus, the Alliance needs a core group of thinkers, scholars and practitioners who understand the various dimensions of nuclear issues in depth. In order to contribute to this goal, the NATO Defense College, in cooperation with NATO HQ’s Nuclear Policy Directorate, is organizing the second edition of its Early-Career Nuclear Strategists Workshop at the NDC in Rome, from 30 June to 2 July 2020.
Due to limited space, not all selected participants may be able to present their work.