On 12th March 2015, the NATO Defense College had the honour of welcoming General John R. ALLEN (US MC), former ISAF Commander and currently Special US Presidential Envoy for the Global Coalition to Counter ISIL. Upon his arrival, Gen Allen was welcomed by the NDC Dean Dr Daria DANIELS SKODNIK (SVN C) also on behalf of the NDC Commandant, Maj Gen Janusz BOJARSKI (POL F). After spending time in discussion with the Dean and NDC leadership, Gen Allen was escorted to the Maynard-Thorn Auditorium to address Senior Course 126 (SC 126), NRCC-13, and NDC faculty and staff. 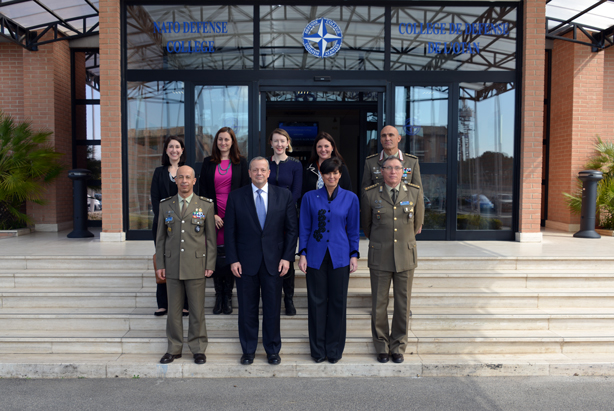 In her introductory remarks, the Dean underlined that in the changed global context decision making demands a new way of thinking of future strategic leaders. The NDC is profoundly aware of its responsibility in this regard given the need to keep a pace when dealing with complex, fragile and uncertain security landscape. In this respect, she expressed the Collegeâs deep gratitude to Gen Allen for agreeing to address a keen audience on his experience as a strategic leader in several complex theatres of operation in the national and international context.

General Allen is well known for his command of the ISAF mission in Afghanistan from July 2011 to February 2013. He was the first Marine Corps General Officer to assume a war Command and lead the largest and longest-standing Coalition in modern history. His winning leadership was firmly based on training the Afghan forces to take the lead on security. As a result, his campaign was fundamental in the transition process from ISAF to the new Resolute Support Mission.

Gen Allen continues to maintain close ties with the College, to the great benefit of the Senior Course and the NATO Regional Cooperation Course Members.

During his lecture, Gen Allen focused on the importance of strategic leadership, discussing the lessons learned from ISAF and the ongoing international efforts to fight ISIL. He identified several pillars of strategic leadership, to be considered essential in any environment, any campaign and in any context. In particular, he focused on the importance of the strategic planning, the information environment and thorough understanding of the human factor as well as other crucial aspects followed by his own example.

Gen Allen also continues to be active in the US policy arena, and his experience is sought at the highest levels of government. Currently, he serves as Senior Advisor to the US Secretary of Defense. He is also a Distinguished Fellow in the Foreign Policy Program at the Brookings Institute. Gen Allenâs contingency and combat operations assignments included: Operation Sea Signal, in the Caribbean (1994); Operation Joint Endeavour, in the Balkans (1995-1996); Operation Iraqi Freedom, in Iraq (2007-2008); and Operation Enduring Freedom, in Afghanistan (2011-2013).