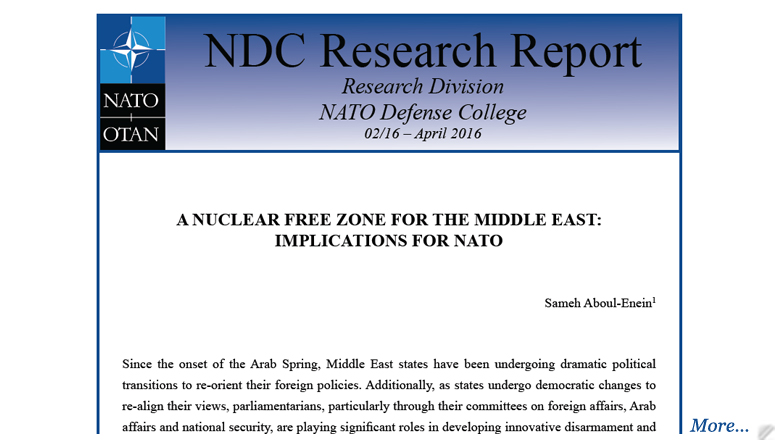 "Since the onset of the Arab Spring, Middle East states have been undergoing dramatic political transitions to re-orient their foreign policies. Additionally, as states undergo democratic changes to re-align their views, parliamentarians, particularly through their committees on foreign affairs, Arab affairs and national security, are playing significant roles in developing innovative disarmament and security policies, including policies on terrorism, the illicit flow of arms, landmines, cyber terrorism, and the risk of nuclear proliferation, from both non-state and state actors. Thus, while the region is undergoing a dramatic shift, new ideas and policies are being developed to address the aforementioned emerging security challenges."

"As the region experiences an unprecedented time of change, NATO has become increasingly interested in collaborating with Middle East states through its Mediterranean Dialogue. Its sharing of interests with these states stems from its historic interactions with several Mediterranean Dialogue partners, which were part of the IFOR and SFOR peace operations in Bosnia and Herzegovina and the Cooperative Best Effort 2005, a field-training program. As a result of the pre-existing relations between NATO and several states, NATO affirmed that âsecurity in the whole of Europe is closely linked to stability and security in the Mediterranean.â"

(Excerpt from the publication; please download it to read more)