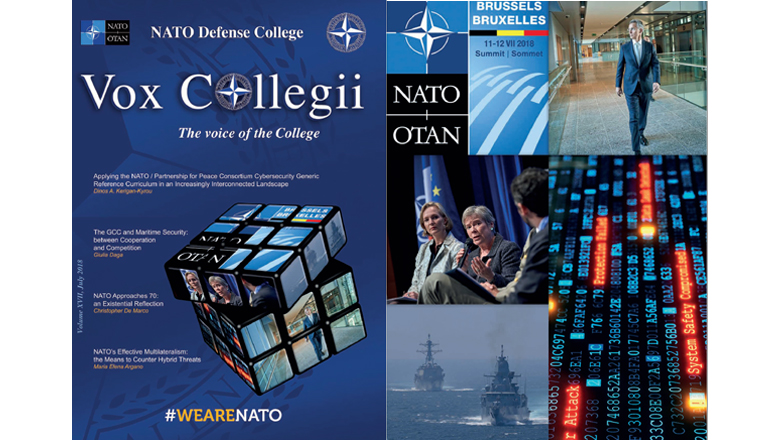 In this editorial, I would like to introduce you to the latest edition of Vox Collegii, a cornerstone of our institution. In the next few pages, you will find an in-depth analysis of topics, such as cyber and maritime security, NATOâs effective multilateralism, and newly developed technologies in the field of military aviation.

In the first of the articles, Prof Kerigan-Kyrou describes how cybersecurity is increasingly becoming central to every aspect of our lives. For this reason, the Cybersecurity Generic Reference Curriculum adopts a holistic, multidisciplinary approach to the domain; from basic cyber awareness to sophisticated training within complex networked environments.

The second topic is on the Gulf Cooperation Council (GCC), in the article the author explains how a common maritime security strategy is far from being achievable, because of maritime border disputes, historical distrust and differing political objectives. As a result, NATO has followed a bilateral approach, with the establishment of Individual Partnership and Cooperation Programmes (ICCP), with Kuwait in 2014 and the UAE in 2016.

Christopher De Marco, in his article, gives us some valuable current insights on the role and relevance of NATO in an age of rapid change; while in the last article on the importance of NATOâs effective multilateralism â its ability to interact with other international actors in order to prevent and solve challenges, especially in countering hybrid threats arising from a multilateral order â is examined. An example of this process of adapting its strategies and structures is given when, in 2016, NATO started a regular cooperation with the EU, to counter the hybrid threats which posed a danger to the security of both institutions.

Over the last six months, the NATO Defense College has continued to develop its three key missions, with a special and particular focus on outreach activities. Many initiatives have been enhanced, with the participation of the Commandant who has played a key role in external activities such as, the Conference of Commandants, held in Zagreb; the Riga StratCom Dialogue 2018; and the last edition of the G7 held in Canada, where she was appointed a member of the Gender Equality Advisory Council. The Council prepares fundamental guidelines, collected into âRecommendations for Canada's G7 Presidencyâ, crucial for a wider gender equality environment among the G7 countries.

In keeping with tradition, the NATO Defense College successfully delivered the 7th edition of the Senior Executive Regional Conference (SERC) and the 19th NATO Regional Cooperation Course (NRCC), which represent two of the most significant examples of outreach and engagement towards members and partners, alongside Senior Course 132(SC), the flagship course of the College.

In accordance with the 5 main areas of activity agreed at the NATO Heads of State and Government summit in July, the NDC programme continues its work for the benefit of the Alliance on defence and deterrence, projecting stability, NATO-EU cooperation, adaptation, and the fight against terrorism.