This website uses cookies to ensure we can provide you with the best browsing experience.
x
NDC - News- âNATO 2030. United for a new eraâ: a Digest 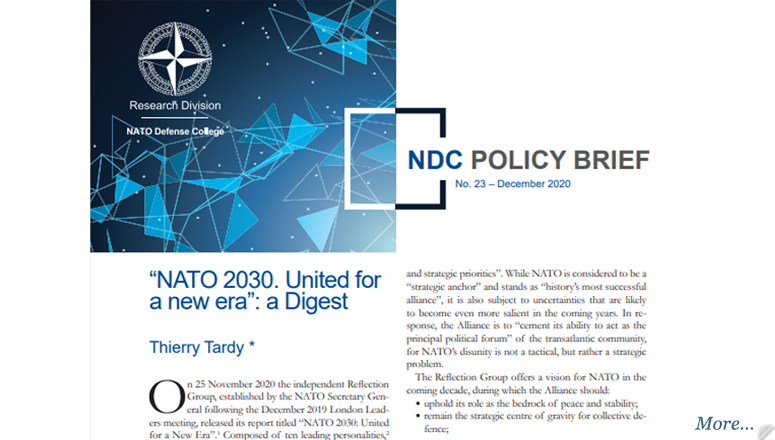 On 25 November 2020 the independent Reflection Group, established by the NATO Secretary General following the December 2019 London Leaders meeting, released its report titled âNATO 2030: United for a New Eraâ.1 Composed of ten leading personalities,2 the Group was mandated to look at NATOâs current and future role and suggest recommendations on how to reinforce Alliance unity, political consultation between Allies, and NATOâs political role.

The initiative came implicitly as a response to the French Presidentâs statement about NATO being âbrain deadâ, made in the context of the October 2019 US withdrawal from northern Syria and the subsequent Turkish operation there, both apparently carried out without consultation within NATO.

The Report is divided into three parts, looking in sequence at: the vision and main findings; the security and political environment; and recommendations.

* (back) Director of the NDC Research Division.

1 (back) âNATO 2030: United for a new era. Analysis and recommendations of the Reflection Group appointed by the NATO Secretary Generalâ, Brussels, 25 November 2020.