This website uses cookies to ensure we can provide you with the best browsing experience.
x
NDC - News- NATO 2030 â The Military Dimension 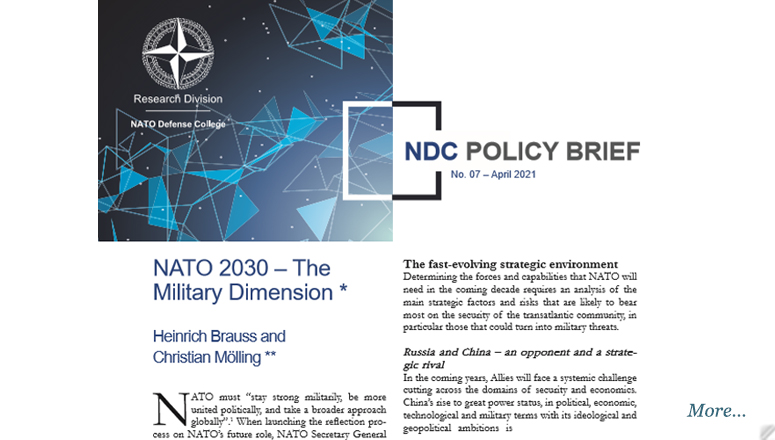 At their meeting in London in December 2019, NATOâs political leaders mandated a âforward-looking reflection processâ on how NATO should further adapt to ensure it was able to successfully cope with a world of competing great powers due to the rise of China and Russiaâs persistently aggressive posture, together with instability along NATOâs southern periphery, new transnational risks emerging from pandemics, climate change and disruptive technologies. Establishing a unified strategic vision is vital for upholding the Allianceâs cohesion, credibility and effectiveness. Looking forward, what does this mean for NATOâs military dimension?

* (back) This Policy Brief on the military dimension of the Alliance is the third of a series of three texts that the NDC has released in relation to the NATO 2030 process. The first two texts, dealing with the political dimension and the global dimension of NATOâs future, were released in March (Policy Briefs No.5 & No.6).
** (back) Christian MÃ¶lling is Research Director at the German Council on Foreign Relations (DGAP). Heinrich Brauss is Senior Associate Fellow at DGAP, and former NATO Assistant Secretary General for Defence Policy and Planning.
1 (back) Remarks by NATO Secretary General Jens Stoltenberg on launching #NATO2030 â Strengthening the Alliance in an increasingly competitive world, NATO, 8 June 2020.