This website uses cookies to ensure we can provide you with the best browsing experience.
x
NDC - News- The Cuban Missile Crisis, the Russia-Ukraine war and nuclear risks

The Cuban Missile Crisis, the Russia-Ukraine war and nuclear risks 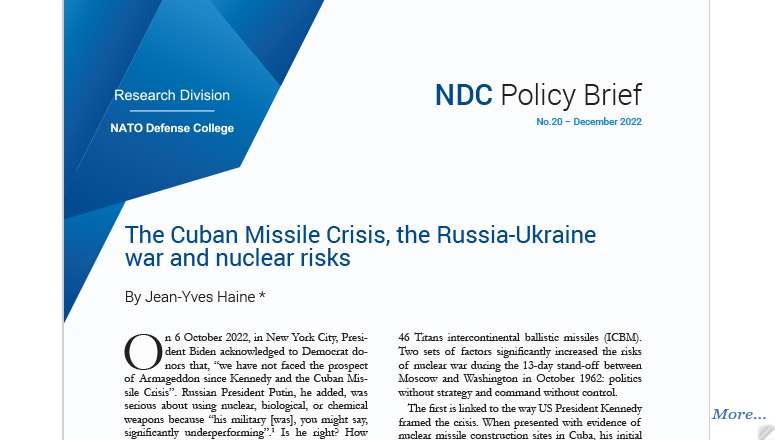 On 6 October 2022, in New York City, President Biden acknowledged to Democrat donors that, âwe have not faced the prospect of Armageddon since Kennedy and the Cuban Missile Crisisâ. Russian President Putin, he added, was serious about using nuclear, biological, or chemical weapons because âhis military [was], you might say, significantly underperformingâ.1 Is he right? How dangerous was the Cuban Missile Crisis? What lessons can NATO draw from this historical moment? An analysis of both the sequence of events during the Crisis and retrospective views of the decision makers involved points to the affirmative. Moscowâs nuclear rhetoric during its war with Ukraine may bring NATO to a different yet equally dangerous confrontation. The nuclear standoff between the Soviet Union and United States over Cuba points to the importance of reputation, risk taking, command-and-control, and sheer desperation that may at any point escalate to a nuclear exchange. For NATO and the Allies, lessons include the need for risk reduction, recognition of potential errors and accidents, managing Ukrainian expectations, and dialogue with Russia.

* (back) Professor at the Sorbonne Nouvelle Paris 3 and Sciences Po Paris.
1 (back) D. E. Sanger, âBiden turns to lessons from the Cuban Missile Crisis to deal with Putinâs nuclear threatâ, The New York Times, 9 October 2022.