This website uses cookies to ensure we can provide you with the best browsing experience.
x
NDC - News- Conference Report: "NATO and New Ways of Warfare: Defeating Hybrid Threats" 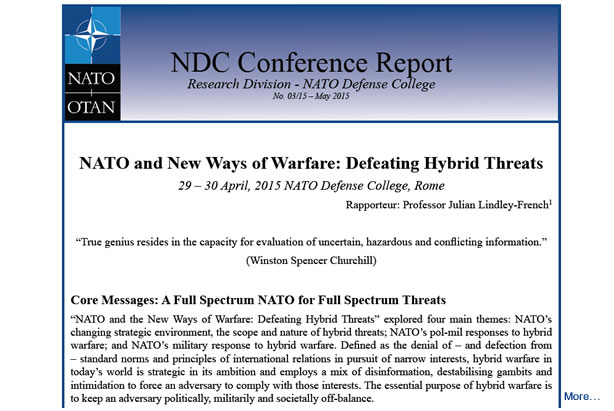 At the seminal Wales Summit of September 2014, the Heads of State and Government of the North Atlantic Treaty Organizationâs (NATO) 28 member states unequivocally observed that: âWe have gathered â¦ at a pivotal moment in Euro-Atlantic security. Russiaâs aggressive actions against Ukraine have fundamentally challenged our vision of a Europe whole, free and at peace. Growing instability in our southern neighbourhood, from the Middle East to North Africa, as well as transnational and multi-dimensional threats, are also challenging our security. These can all have long-term consequences for peace and security in the Euro-Atlantic region and stability across the globe.â

Part of the NATO Defense Collegeâs (NDC) mission is to explain, inform and shape the strategic-level policy debate of the Alliance on topical military and political issues, and to provide current and future leaders with opportunities for comprehensive reflection. The April Conference has been one of those platforms, promoting an open exchange of ideas to develop counter-strategies to the hybrid threat confronting NATO and its Partners. The ability of all Allies and the Alliance as a whole to understand the nature of âhybridâ warfare and to respond proportionately served as the leitmotif throughout the Conference. As the threats differ in nature, between those from Russia in the East to those from the so-called âIslamic State of Syria and the Levantâ (ISIL) to NATOâs south, the distinction between the concepts energized much of the discussion during the Conference. While the NDC constantly seeks to make a valuable contribution to common understanding, the NDCâs current leadership conceived the idea of convening a two-day international research conference in Rome to address: âNew Ways of Warfare: Defeating the Hybrid Threatâ. As NATO, in the twenty-first century, exists in a dynamic strategic environment, security and defence requirements need broad public support at all levels. Accordingly, we addressed the new security challenges with senior political and military decision- makers in NATO and from the member states, as well as from partner countries, with security experts from the international âstrategic communityâ, ranging from âthink tankersâ to academics â in order to provide a range of perspectives on the security agenda. During the first dayâs open session, the media were invited to help us convey our message.

The attached conference report offers a summary of the discussions and policy recommendations made during the Conference, as recorded by the eminent British scholar, Professor Julian Lindley-French, to further broaden our knowledge of twenty-first century NATOâs strategic environment and defence requirements, âenabling peace and security in the Euro-Atlantic region and stability across the globeâ.

The insights contained in this paper, and the Conference that inspired them, would not have been possible without the dedication and commitment of so many people. Special mention should be made of the gracious support offered by the Republic of Poland and the NDC Research Divisionâs professional guidance, under the leadership of Dr Jeffrey Larsen. But the entire College is to be commended for exceptional service. At the end of the NATO Foreign Ministersâ meeting on May 14th, in Antalya, Turkey, Secretary General Jens Stoltenberg stated: âThe challenges we all face demand a comprehensive response, so all of us need to work even closer together.â The NDC remains, as ever, dedicated to serving the Alliance and its member states and, at the same time, to offering its partners an opportunity to join them for open discussions on difficult issues, within the rapidly changing security environment of the early 21st century, so as to ensure a common and more peaceful future.